After the Los Angeles City Council gave final approval on May 24 to a $10.6 billion budget for fiscal year 2019-20, councilmen representing the 4th, 5th and 13th districts highlighted some of the projects that will receive funding. 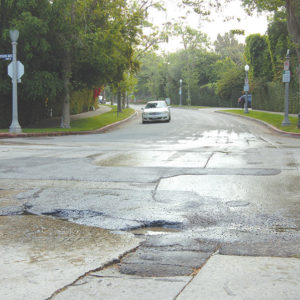 More funds have been earmarked for concrete street repair in the city’s new budget, including in areas such as Hancock Park. (photo by Edwin Folven)

They range from infrastructure projects, such as concrete street repair in Hancock Park and a new flashing beacon to improve pedestrian safety in Hollywood, to an alley repair program in the 5th District. Also included were increases in funding to address regional issues such as homelessness, climate change and the elimination of wildlife habitat in areas like the Santa Monica Mountains.

“This budget is one of our city’s strongest and includes crucial funding for infrastructure, public safety and quality of life issues that I have long fought for,” said Councilman David Ryu, 4th District. “The street you commute on, the trees on your block, the safety of your neighborhood, these are bread and butter issues. I’m glad to see these priorities get the funding they deserve.”

The new budget includes $7 million for concrete street repair under a new program by the Bureau of Street Services. Ryu fought for the funds because many of the city’s concrete streets in Hancock Park and the surrounding neighborhoods have not been repaired for decades. Some intersections are already being repaired under a precursory plan.

Ryu also touted $25 million in funding for tree planting and maintenance included in the new budget. Some of the money will be used to develop long-term strategies to care for the urban forest, including $2 million for a citywide street tree inventory and the development of an urban forestry management plan.

“The new funding in this budget includes many of the priorities I campaigned on and I have fought for over the past three years,” Ryu added. “After all that effort, it’s great to see a city budget that reflects these quality-of-life needs.”

Councilman Mitch O’Farrell, 13th District, also praised the budget for funding priorities in the Hollywood area. Among them is $500,000 for the Hollywood Walkability program, which aims to promote the pedestrian experience in Hollywood. O’Farrell also highlighted $100,000 in the new budget for a flashing beacon to be installed at the intersection of Marathon Street and Virgil Avenue in East Hollywood, where there has been an increase in pedestrians, O’Farrell’s spokesman Tony Arranaga said. The new flashing beacon is anticipated to be in place after the beginning of the fiscal year on July 1.

O’Farrell also lauded $100,000 to fund the Midnight Stroll Transgender After Hours Café, a program that conducts outreach for transgender and homeless individuals along Santa Monica Boulevard in Hollywood. The program has expanded to areas in downtown Los Angeles, Arranaga added.

The budget also includes $2 million for renovations at the Frank Lloyd Wright-designed Residence A at Barnsdall Park. The building, a guesthouse for Wright’s famed Hollyhock House in the hilltop park in Hollywood, is undergoing a seismic retrofitting after being damaged in the Northridge earthquake. The building, which has been closed since 2000, has been undergoing a $5.2 million retrofitting project since 2016 but complete funding had not been secured. The new budget adds $2 million to the effort.

“My priorities for this next fiscal year focus on making our neighborhoods safer, cleaner and more livable,” O’Farrell said, adding that the budget also includes an 11% increase in funding for homeless services, which he will oversee as the new chair of the council’s Homelessness and Poverty Committee. “I look forward to implementing the recently approved budget items and improvements in the communities that I represent.”

“For too long, our alleys have been left out of the street services budget and many are now in bad shape,” Koretz said. “We’ll be working with constituents and neighborhood councils to identify the alleys with the most need, and we hope to make some good progress in the coming year.”

Other priorities are regional, said Koretz’s spokeswoman Ali Simard, such as funding for wildlife corridors, which will protect open spaces in the Santa Monica Mountains that are used by animals, and the launch of a Climate Emergency Mobilization Office, which will help implement Mayor Eric Garcetti’s Resiliency and Green New Deal goals to conserve energy and water to reduce the city’s carbon footprint.

Other highlights of the new budget are $47 million to cover additional overtime by Los Angeles Police Department officers, and $50 million for street safety improvements such as crosswalks, traffic signals and bike lanes. An additional $43 million was budgeted to increase outreach for homeless individuals, provide housing and clean up areas where encampments were located.

“[The] city budget is the most robust one adopted during my tenure on the City Council,” Koretz added. “It includes resources and exhibits values that will help shape our future and make this city a better place for everybody in the coming years.”