See the history of jazz at Sunset Marquis

A new photo exhibition of jazz musicians delves into the personal and professional lives of the people who helped the genre grow into a popular art form while remaining true to its roots. 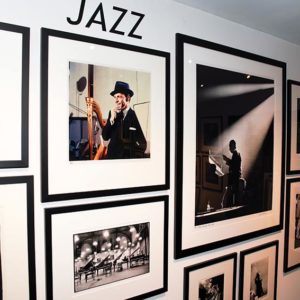 The show, “Jazz: the Birth of Cool,” will be on display in the Morrison Hotel Gallery in the lobby of the Sunset Marquis in West Hollywood and the gallery’s other locations in New York City and Maui.

“Usually, we’re very rock and roll and classic rock-heavy with our exhibits, so I was really excited to put this one together,” said Casey Fannin-Kaplan, gallery and sales director of the Los Angeles location.

Featuring shots by well-known photographers like Herman Leonard and Francis Wolff,  the show also is a testament to the talent and perseverance of photographers who overcame conditions that aren’t easy to shoot in, Fannin-Kaplan said.

For instance, Leonard had to bring his own lights to capture Billie Holiday performing in a dark, smoky room, but the extra effort ended up producing one of the gallery director’s favorite photos in the show.

The exhibit contains more than just shots of stages. There’s also pictures from recording booths, backstage areas and even some of the artists on vacation or at home are depicted, such as a photograph of Holiday cooking dinner in New York City.

Jamie Bucherer, sales manager for the Los Angeles location of the gallery, said they’ve seen a good turnout since the show opened to the public on April 26. Bucherer added that the photos are a beautiful showcase of many jazz musicians who were “true rock stars in their own right,” people like Louis Armstrong, Duke Ellington and Miles Davis.

“Everybody loves music. To capture people’s favorite musicians on stage or behind the scenes, people just really connect with that,” she said.

The show also features several pictures from the estate of Frank Sinatra, including the crooner’s mugshot and a self-portrait a young Sinatra snapped in the mirror. Fannin-Kaplan said it’s interesting to see a side of Ol’ Blue Eyes that wasn’t the one he showed on stage or screen.

“We feel really special that [the Sinatras] opened up their family portraits to share with us, and collectors can take a piece of their family history home with them,” Fannin-Kaplan said.

“We have a variety for every type of collector,” Fannin-Kaplan said.

“Jazz: the Birth of Cool” will be on display until May 12. The Morrison Hotel Gallery’s next show, a collection focused on Rolling Stones guitarist Keith Richards called “Keith Unfiltered,” begins on May 23.