Local opponents to SB 50, a controversial housing bill that would have added more development density throughout the state, had a moment of respite last week when it was deferred to 2020 by the Senate Appropriations Committee. 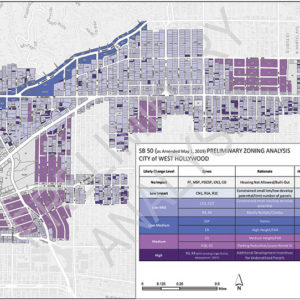 West Hollywood city staff presented this graphic, which shows the areas of West Hollywood that would have been affected under the SB 50. The bill has since been shelved until 2020, although its most ardent supporters are still calling for a vote on the state Senate floor this year. (graphic courtesy of the city of West Hollywood)

“Solving this housing crisis will take hard choices, but they are choices we should be making together,” Los Angeles City Councilman David Ryu, 4th District, said in a statement. “Last year, Los Angeles built more units of housing than any other city in California. If Sacramento lawmakers want to find real solutions to this crisis, they should be looking to Los Angeles, not trying to ignore or overrule us.”

The Los Angeles City Council voted unanimously on a resolution to oppose SB 50, which would have overruled local zoning regulations to add more housing near transit and jobs. Smaller cities such as West Hollywood and Beverly Hills, whose city councils also voted to oppose the bill, were concerned that almost all of their land would be impacted.

The bill’s author, state Sen. Scott Wiener (D-San Francisco), said in a statement that he’s still committed to the legislation, which he says will improve the state’s housing market and alleviate the homeless crisis by allowing more units to be built on land that has always been reserved for single-family housing only.

“California’s failed housing policy is pushing people into homelessness, poverty and two-hour commutes, is pushing working families out of their communities and out of the state entirely, and is undermining California’s climate goals,” Wiener said. “We need to do things differently when it comes to housing. We’re either serious about solving this crisis, or we aren’t. At some point, we will need to make the hard political choices necessary for California to have a bright housing future.”

A number of the state’s big-city mayors, including Los Angeles Mayor Eric Garcetti, said they were disappointed SB 50 did not advance.

“SB 50 wasn’t perfect, but we can’t wait another year to work out our differences,” Garcetti, who had remained neutral on the bill, said in a statement.

Gov. Gavin Newsom also released a statement saying he was disappointed that SB 50 did not advance, after he remained neutral as it worked its way through two Senate committees in April.

In an open letter to state Sen. President Pro Tem Toni Atkins, several organizations that supported SB 50 asked her to bring the bill to the Senate floor despite the Appropriations Committee’s decision to hold it until next year. Occasionally, bills receive a floor vote even after they are held in committee.

“We believe that SB 50 is just as critical to bring back so that more Californians can have a roof over their heads,” said the letter, signed by members of groups including the Nonprofit Housing Association of California, Burbank Housing and Habitat for Humanity California.

Atkins released a statement that said she will respect the Appropriations Committee’s decision.

“Short of significantly amending the bill and limiting its applications in large swaths of the state, there was no path to move forward this year,” she said. “More work needs to be done, and there is no better leader on housing to do that work than Senator Wiener.”

“We really urge the legislature and Scott Wiener to slow this down,” said Jill Stewart, a local activist who has been protesting the bill, on a conference call hosted by the AIDS Healthcare Foundation, which had also rallied opposition against the bill.

“The war is clearly not over,” said Brad Kane, president of the South Carthay Neighborhood Association, another one of the speakers. “We have stopped the advance, but we have to stay vigilant.”

Get some satisfaction at Morrison Hotel Gallery