Opponents of SB 50 gathered at Holman United Methodist Church in South L.A. on May 22, even after the bill was shelved by the Senate Appropriations Committee until 2020.

The bill would override local zoning to add more development density near jobs and transit. Residents who live in areas that are currently zoned for single-family housing have been especially critical of the bill, authored by state Sen. Scott Wiener (D-San Francisco).

“We all need to recognize that we do have a housing crisis, and we need to creatively come up with a way to try to fix that,” Los Angeles City Council President Herb Wesson told a crowd of about 300 residents. “But who better to do that than the people who live in the area?”

Bills that stall in committee can still be called for a floor vote, but Sen. President Pro Tem Toni Atkins (D-San Diego) said in a statement that she will respect the Appropriations Committee’s decision to hold it until next year. Wesson and a panel of speakers including Los Angeles City Councilman Paul Koretz, 5th District, and South Carthay Neighborhood Association President Brad Kane urged everyone at the town hall to continue building the opposition. 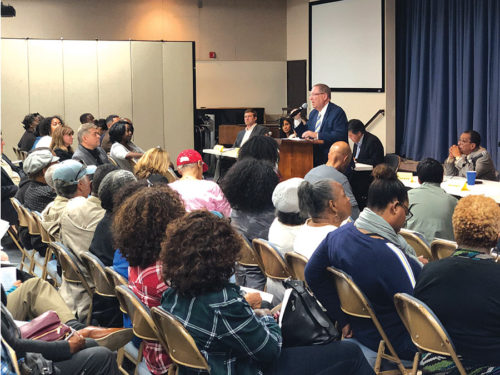 Los Angeles City Councilman Paul Koretz authored the council’s motion to oppose SB 50, which many neighborhood groups have opposed due to the potentially drastic changes it could cause in their communities. (photo by Luke Harold)

“You guys don’t realize how many people are going to work every day, how many people are at home right now watching television that don’t have a clue what SB 50 is,” Wesson said. “They don’t have a clue, so one of your responsibilities as an organized group is to make sure we educate our neighbors and try to grow the number of people that at least have a feel for what’s going on.”

Wesson, a former assemblyman, added that SB 50 is “like a vampire, it can be brought back to life.” (Wiener responded on Twitter that he prefers to think of it as a “phoenix rising from the ashes.”)

Wiener has promoted the bill as a solution to the statewide housing shortage that can alleviate homelessness and bring down the cost of living. Opponents are worried it would result in a disproportionate amount of new luxury housing that wouldn’t help solve either issue.

Koretz also told the crowd that Wiener thinks single-family housing is immoral, a commonly repeated claim among SB 50 opponents, even though Wiener has never said that.

But opponents still think the bill would lead to drastic changes to their communities. In a presentation of potential alternatives, Kane, who also serves as president of the PICO Neighborhood Council, said he’s building a casita, also known as an auxiliary dwelling unit or granny flat, for his 88-year-old father. These units are becoming popular among homeowners who want to supplement their incomes by renting them out, and they can also add to the affordable housing stock. He also mentioned a vacancy tax, such as the one implemented in Vancouver, or a tax on foreign investment in residential real estate, which has been adopted in Toronto.

California’s affordable housing stock has also been adversely affected by a provision in the state constitution, approved by voters in 1950, that requires all publicly funded affordable housing projects to be approved by voters, which exacerbated the de facto segregation in many L.A. neighborhoods. State Sen. Ben Allen (D-Santa Monica) is leading an effort to repeal that provision with a 2020 ballot initiative. Kane said the provision has inhibited local control.

“Maybe we should uncuff our neighborhood heroes and let them take the transaction taxes and whatever else, and build real affordable housing and then they can decide what’s fair, instead of people in Sacramento,” he said.