Running the road to recovery from a stroke

On August 30, 2017, Gregory Rutchik had just come back to his Los Angeles home from a trip to Seattle when he began experiencing some strange symptoms – a crick in his neck, some lightheadedness. 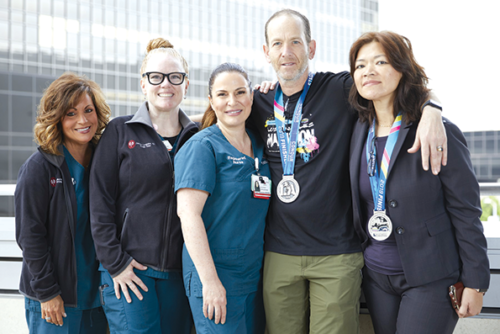 An otherwise healthy 51-year-old who practiced combat martial arts and jogged a few miles on the weekends with his wife, Rutchik pressed on with his day, catching up on work. When he wasn’t able to focus enough to meditate that evening, he thought he may be coming down with the flu.

It was only when his words came out garbled that he realized the severity of the problem.

During Rutchick’s time at Cedars-Sinai, his day nurse, Marianne Carlota, suggested he sign up to run the Los Angeles Marathon with his wife. At the time, Rutchik said, it seemed impossible. About a week after surgery, with the OK from his care team to begin light physical exercise again, Rutchik went on a short jog.

“My heart kind of leaped out of my chest. I came back to my wife and I’m like, ‘Wow, this is not going to be good,’” Rutchik said.

But Rutchik was determined to get back to a healthy lifestyle. After a few days, he was able to run without any problems. Rutchik, who went on to run the New York City marathon in late 2018 and the Los Angeles Marathon in March, now says he’s in better shape than he ever was.

“One day, I’d like to run the San Francisco marathon,” he said.

Also on Rutchik’s list of goals is competing in a triathlon next year. He hopes to eventually work up to a 100-mile ultramarathon. To get through long training runs and grueling races, Rutchik uses the same techniques that helped him keep his cool during his stroke.

In running and in life, Rutchik said, “We have to tell ourselves what we need to hear to keep moving, because there are more than enough reasons to pull us down.”