Preserving the Hollywood of yesteryear 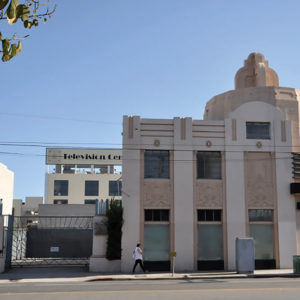 The Afga Ansco Corporation Building on Santa Monica Boulevard was named a historic-cultural monument on May 15. (photo courtesy of the Los Angeles Department of City Planning)

The Los Angeles City Council’s Planning and Land Use Management Committee approved the landmark designation on May 7, and the City Council voted 10-0 to add the building to the city’s list of historic-cultural monuments. Five council members ­– Gilbert Cedillo, Marqueece Harris-Dawson, Jose Huizar, Paul Krekorian and Curren Price – ­were absent.

Los Angeles City Councilman Mitch O’Farrell, 13th District, supported the building’s nomination, as he has for 19 other buildings since he took office in 2013, he said.

“The Agfa Ansco building is an excellent blend of Art Deco and Streamline Moderne styles that were significant during Hollywood’s heyday. This structure played a critical role during the Golden Age of the motion picture industry, housing the photographic film, paper and cameras used to create movie magic,” he said.

When German camera and film company Agfa Ansco built the structure in 1937, Art Deco architecture was prevalent in Southern California, said Christy McAvoy, who co-founded Hollywood Heritage and is a member of the group’s preservation committee. With this structure, Agfa Ansco wanted to make an “architectural statement,” she said.

“The fact that it was on a major thoroughfare, it was designed to attract attention,” McAvoy said.

Fashion designer Jeremy Scott owns the building, and Carl Pierose, of Industry Partners, which represented the property’s former owners in the sale to Scott, said the structure is constructed of high-quality materials.

“I personally am really a fan of this exact kind of building. It’s just definitely a special, special structure,” Pierose said.

Beyond the design, the structure housed work that was important for the early film industry.

Agfa Ansco, which occupied the space for more than 20 years until the late 1950s, developed several breakthroughs in film technology that allowed other improvements, such as better lighting and color. After Agfa Ansco’s departure, the Birns & Sawyer Cine Equipment Company, which allowed filmmakers to buy or rent filmmaking equipment ­– including for major films like “Lawrence of Arabia” and “Easy Rider” – moved in.

“People just think about what happens on the movie studio lots themselves, but they don’t think about the infrastructure of companies around the studios. They provided a lot of the talent and workforce that went into making them,” McAvoy said.

McAvoy said the Agfa Ansco building provides a “physical representation” of what the movie industry was like in that era.

“We look to buildings to tell stories … If you lose these buildings, all you can refer to is photographs to understand what it might have been like at a period in time. As long as you have the buildings there, people get a tactile and better visual experience than just looking at photographs,” she said.

Council frees up $3.6 million in idle funds identified by controller

I just passed this building, snapped a picture, and postedit on the “Photos of LA” Facebook group. It got a lot of attention and that’s how I got to this wonderful article. Please reply if you’d like to see my photo or take more photos for you. I’m not a professional photographer, but it is a wonderful hobby of mine.
Francine Menashe