Since video game movie adaptations first infected Hollywood in 1993 (good ol’ “Super Mario Bros.”), none have become a bonafide hit. No number of “Mortal Kombat,” “Street Fighter,” “Resident Evil,” “Silent Hill” or “Final Fantasy” sequels add up to more than lining for a landfill alongside forgotten copies of Atari 2600’s “E.T.” The entire genre is a mess, one that gave us a very white Jake Gyllenhaal as the “Prince of Persia,” allowed Angelina Jolie’s Lara Croft to punch a great white in the snout, and spent more time in a boring lab than 15th century Spain in “Assassin’s Creed.” 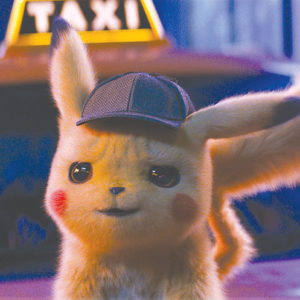 When 2018’s yawner “Tomb Raider” arises as the cream of the pixelated crop, something is very wrong. Perhaps angry family groups asked a sorcerer to curse video games for all that violence allegedly making their kids so aggressive. If that’s true, then “Pokémon Detective Pikachu” is a kind of magical cure, albeit a modest one. All it takes is Ryan Reynolds voicing an adorable creature, effective CGI and a storyline less predictable than the final season of “Game of Thrones.” (I’ll never forgive them.)

To call “Detective Pikachu” bonkers is a ridiculous hot take that erases 24 years of franchise history and all the hours younglings – and some elder folks as well – spent walking the streets in service of “Pokémon Go.” Instead, the film takes seriously that audiences care about this world. No opening crawl explains how humanity and Pokémon exist side by side, nor does someone from our Earth happen upon this strange place (blame the “Smurfs” flicks for that trash tactic). Either approach assumes us muggle moviegoers are just too dumb or media illiterate to immerse ourselves in something so far-fetched.

And so, we enter the story through Tim Goodman (Justice Smith), just an average dude with a boring job. Unlike most folks around him, he owns no Pokémon companion. Chalk that up to daddy issues, which only worsen when the police inform him of pop’s demise. When Tim (good name he’s got) visits deceased dad’s apartment, he encounters an unexpected house guest, a Pokémon known as Pikachu (Reynolds) who can speak. Alas, only Tim understands the fuzzy yellow guy; everyone else just hears adorable nonsense like “pika pika.”

Pikachu has another problem: he has no memories of his past or the event leading up to dad’s alleged accident. But he fancies himself a detective like his former master, and so the pair traverse the rich elite and the Pokémon-human underbelly in search of answers. 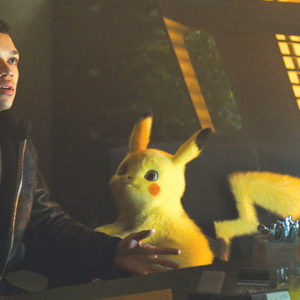 Another major nod to its genre kin belongs to Lucy Stevens (Kathryn Newton), an aspiring journalist currently writing listicles as an unpaid intern. (Pause: yes, that’s a real shorthand term for list articles; and no, it should never seriously be used in conversation.) Lucy delivers her first lines like a classic gumshoe reporter hungry for a scoop on dad’s last investigation. Too bad “listicle” and “intern” intentionally spoof the moment.

Tim and Lucy develop quite the rapport, implying affection but always remaining focused on the mystery at hand. However, the most charming moments belong to Tim and Pikachu, an unlikely buddy duo. Tim’s pride and discontent dance nicely with the junior god of thunder’s mouthy sarcasm and coffee addiction. We owe much to Reynolds, whose vocal talents are the soul of the film. Sure, early reports that Danny DeVito might voice the character would’ve taken things a very different direction indeed, but that doesn’t undermine how delightful the experience is with Reynolds.

Perhaps every single video game adaptation is just so bad that “Detective Pikachu” plays like smash hit. Or maybe I just want my favorite Nintendo 64 “Super Smash Bros.” character to remain on top. Nope. Such sentimentality is only a distraction. In truth, this video game adaptation is entirely enjoyable, a satisfying combination of visually impressive and narratively convincing, even including a clever, heartfelt twist that might render sequel plans less likely. That’s a testament to the film’s stronger emphasis on story than other video game film adaptations. Praise be to Pokémon, the curse is lifted … for now.