Paley Center takes visitors on a voyage to the final frontier

The Paley Center for Media in Beverly Hills presents “Star Trek: Discovery-Fight For The Future” running through Sunday, July 7. 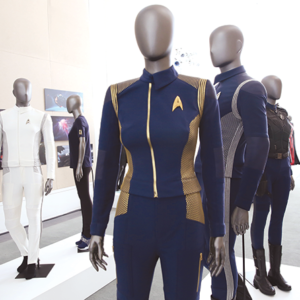 The exhibit honors the 50-plus year legacy of one of the most storied science fiction franchises in television history. Visitors will be taken on a journey to the final frontier in an immersive multimedia display.

“Star Trek is one of the most original and daring franchises in television history, and we’re honored to be the first to present this visually stunning exhibit celebrating the latest installment in the storied franchise,” said Maureen J. Reidy, president and CEO of the Paley Center for Media.

In its second season, the Discovery crew investigates multiple signals left by a mysterious being called the Red Angel. “Star Trek: Discovery-Fight for the Future” reflects the obstacles the crew faces in saving the future from a nefarious artificial intelligence attempting to destroy all sentient life in the galaxy. The interactive exhibition, encompassing two floors of the Paley Center, includes production and concept art, models, props, costumes, prosthetic makeup busts, set pieces including the U.S.S. Discovery captain’s chair, and much more.

“Coming off a successful season two of Star Trek Discovery, we are excited to partner with the Paley Center to give fans and visitors an opportunity to see and interact with drawings, costumes and set design from the series,” said David Stapf, president of CBS Television Studios. “This exhibit will allow fans a tactile experience never before seen beyond the studio’s stages.”