“We must rewrite our immigration laws in our own image to reflect communities like this one here in Los Angeles, like El Paso, like this country,” said O’Rourke, who represented Texas in the House, speaking in front of several hundred supporters in the college’s courtyard. “And that means freeing every Dreamer from any afear of deportation by making them U.S. citizens in this, their true home country.” 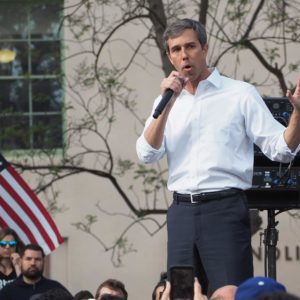 The fate of Dreamers, who were brought to the U.S. illegally by their parents as children and have been awaiting legislation to give them a path to citizenship, has been one of the most contentious issues between California Democrats and the Trump administration. Los Angeles City Councilwoman Monica Rodriguez, 7th District, spoke about the opportunities her parents, who were immigrants, gave her.

“We all stand here today in unity because we see that more and more, that opportunity has faded, and we are watching the pages of history go backwards,” she said. “And we can’t tolerate that behavior any longer.”

O’Rourke, who rose to prominence in a longshot bid to unseat Texas Sen. Ted Cruz (R) in the November 2018 election, is one of 20 candidates seeking the Democratic nomination for president. The 2020 presidential campaign will be the first election cycle since a new California law took effect that moved the state’s primary up to March. The law was proposed by former state Sen. Ricardo Lara, now the state insurance commissioner, who said the change means “both parties can’t treat immigration, climate change, criminal justice reform and investing in jobs and innovation like afterthoughts.”

With California on the frontlines of many pending legal battles against the Trump administration on issues including immigration and climate change, O’Rourke’s trip to California, which included stops in San Francisco, San Diego and the Central Valley, focused on several of those topics. His campaign events followed a California trip by Trump, who visited the U.S.-Mexico border in the first week of April, and stopped in Beverly Hills for a fundraiser.

“We will not purchase security with a $30 billion, 2,000-mile-long, 30-foot-high wall,” said O’Rourke, whose district and home city is located on the border. “We will not force others who are coming to this country to join family, to flee persecution or death, to cross the most inhospitable stretches of the border.”

The new state law was also designed to give Californians a bigger role in deciding the nominee. Candidates who have travelled to the state so far include Julian Castro, former secretary of Housing and Urban Development in the Obama administration, who visited Hancock Park in February; and Vermont Sen. Bernie Sanders (I), who fell short of the nomination in 2016, held a rally attended by tens of thousands of supporters in Grand Park last month. Pete Buttigieg, mayor of South Bend, Indiana, who could become the youngest and first openly gay president, has visited West Hollywood, and will return in May for a fundraiser.