Despite concerns that cut-through traffic and cars speeding through southwestern Beverly Hills are getting worse, the Beverly Hills City Council rejected a pilot program proposed by the Southwest Homeowners Association that would have added traffic circles and turning restrictions to the neighborhood. 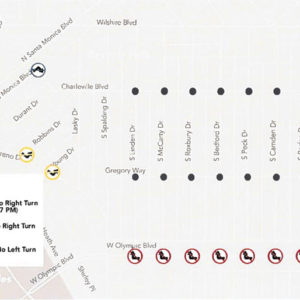 A proposed plan by the Southwest Homeowners Association would have added no-turn restrictions and traffic circles to the neighborhood. (graphic courtesy of the city of Beverly Hills)

Concerned that the proposal was a “piecemeal” solution that might only divert the same traffic issues to other streets, council members said they want to use the city’s Complete Streets Plan, still being drafted, to take a more holistic approach.

“It makes sense to look at potential solutions using Complete Streets, because we’re talking about doing something that hopefully is an integrated vision for the entire city,” Beverly Hills Mayor John Mirisch said.

The pilot program would have restricted right turns off Olympic Boulevard over an eight-block span, from South Linden to South El Camino drives. It also would have added 16 traffic circles, one on Charleville Boulevard and one on Gregory Way on each street included in those eight blocks.

“Our once-quiet residential neighborhood is getting overrun by cut-through traffic,” said Ken Goldman, from the Southwest Homeowners Association.

But the council last week chose not to vote on it. Various attempts over the last 30 years at mitigating traffic in the neighborhood have fallen short, he added, and new development in Century City has made the issues worse.

“We have a problem,” Beverly Hills resident Marjorie Blatt said. “Not everybody finds it a problem, but many of us do. I find it a challenge getting out of my driveway on Linden every morning. I feel much more like a target than I feel like somebody who is just trying to get out of my driveway.”

She added that the pilot would have been “a reasonable three-month test.” The program would have been evaluated after three months before any permanent measures went into effect.

But residents who live on Spalding Drive, one block outside the pilot program’s borders, said the mitigation measures would result in an influx of traffic on their street.

“It might help them at the cost of other people who are residents, even though we’re just tenants in apartment buildings,” said Beverly Hills resident John Bardy, who lives on Spalding Drive. “It’s really just unfair.”

Public comment at the City Council’s May 21 meeting showed more of an opposition to the pilot program, mostly due to concerns about the traffic impacts for the areas outside the pilot program’s borders.

“I saw that a lot of what was being proposed, in my opinion, even to test, felt like it wasn’t what this community mostly wanted, nor did I feel it could work,” Beverly Hills City Councilwoman Lili Bosse said.

The city’s Complete Streets Plan will include improvements to the major traffic corridors throughout Beverly Hills. The public comment period for the plan closed on May 17, and the City Council will review it at a future meeting.