When Ruben Rueda walked past Musso & Frank Grill in Hollywood at the age of 15 in 1967, he spontaneously decided to walk inside and apply for a job as a server assistant. Unbeknownst to him at the time, that decision would forever alter his life and those of countless customers at the iconic Hollywood restaurant. 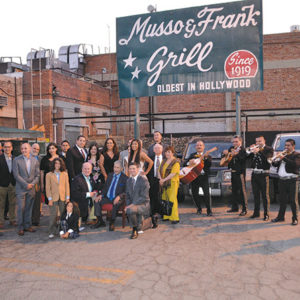 Rueda, who was hired as a busboy and soon became bartender, worked for the restaurant for 52 years. Eventually becoming head bartender, Rueda worked every Tuesday through Saturday from 5 p.m. to close mixing Musso & Frank’s famous cocktails and signature martinis and serving a veritable who’s who of Hollywood history. Rueda died on April 26 of natural causes, but his legacy lives on at the restaurant. Plans for a special tribute to the veteran bartender will be announced in the near future.

“Ruben always knew just what a customer needed, whether it was an ear to bend or a joke to lighten the mood,” said Mark Echeverria, Musso & Frank Grill’s COO and CFO. “He brought professionalism and kindness to his work every day, and his loss will deeply affect many guests and colleagues who long counted him as a friend. Our family has run Musso’s for four generations, and to us, Ruben was, without question, a member of our family.”

Rueda, a native of Durango, Mexico, worked at the restaurant until a few months ago, when he left to be treated for an unspecified illness. He lived in Whittier, where he died last Friday in a hospital. Rueda was 67 years old.

Known as affable and approachable, Rueda became a fixture at Musso & Frank Grill, located at 6667 Hollywood Blvd. He was known for remembering patrons’ preferred drinks, even if he hadn’t seen them in years.

“Ruben helped define what Musso & Frank is all about by making guests feel both in another world and yet very much at home at the same time,” Echeverria added. “He was renowned for treating each and every patron like a star, one of the many reasons he became such an integral part of the incomparable Musso & Frank ‘experience.’”

Musso & Frank Grill spokesman Dan Harary described Rueda as one of a kind and provided a previous quote from him about his love of working at the restaurant.

“Mostly I like to talk to people, and I make people happy. That’s my job,” Rueda said. “But I don’t work at Musso & Frank because I want to work in a bar. I work here because I like these people, because I know these people. I work in the greatest place on Earth. This is home. I see my customers more than I see my wife. I’ve been working here almost all my life. I’m a happy guy.”

Rueda served many icons of Hollywood history, as well as luminaries in the literary, entertainment and music fields. They included Rolling Stones guitarist Keith Richards, who gave the bartender one of his guitars, and other members of the band. Actors Rock Hudson, Orson Welles, Raymond Burr, Steve McQueen and Johnny Depp were regular customers. Others include John Lennon and Gore Vidal.

“I’ve been going to Musso & Frank since the ‘80s. Ruben was one of the greatest people I have ever met,” LaBonge said. “He was so welcoming to everyone, he was such a fixture. I saw him about six months ago. I truly miss him.”

“Our city has lost a beloved fixture at one of Hollywood’s most storied institutions,” Garcetti said. “Rest in peace, Ruben. Cheers to you.”

Musso & Frank Grill is celebrating its 100th anniversary this year and Echeverria noted that tributes to Rueda will be part of special events at the restaurant. A week of celebrations is planned to begin on Sept. 22, Harary added, and details will be announced soon. The restaurant has also started a project in an adjacent space to add private dining rooms, which will be highlighted during the upcoming anniversary celebrations and are expected to open by Thanksgiving.

“I’m heartened that Ruben lived long enough to help us celebrate our 100th anniversary milestone,” Echeverria said. “We will do everything in our power to honor his memory all year long, and for countless years to come.”

Rueda is survived by his wife Maria; son Leonard, who also works at Musso & Frank Grill as a server and bookkeeper; daughter Cynthia and her children Brooke and Sebastian.