The Beverly Hills Unified School District will file additional documents in federal court next week to continue its case against a planned subway tunnel under Beverly Hills High School, with a hearing scheduled June 27. 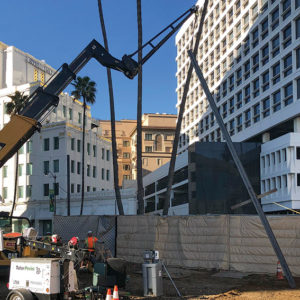 District Court Judge George Wu will consider competing motions: one by the district for the court to grant a summary judgement in its favor, and another by the Los Angeles County Metropolitan Transportation Authority and Federal Transit Administration for the same ruling in their favor.

District Superintendent Michael Bregy said the district’s new filings will explain that “the agencies committed more than a billion dollars to the planned route under the high school while they were supposed to be analyzing alternatives to that route.”

“The agencies then used the money and time they spent on the planned alignment as an excuse not to select viable alternative routes that would be more direct, cost less money and still go to the center of Century City, but would not travel under any classrooms,” he said. “There is no reason for Metro or FTA’s intransigence. Based on well-established case law, their conduct is not only unreasonable but also violates our country’s foundational environmental laws and should be overturned.”

But in a 60-page memo to the court, attorneys representing Metro and the FTA said that claim is “factually unfounded and contradicted by the record.” The seven-year-long legal battle by the district against Metro and the FTA – which has played out in L.A. County Superior Court, the Ninth Circuit Court of Appeals and U.S. District Court – has not changed the currently planned tunnel alignment. The last ruling was in 2016, when Wu affirmed FTA’s approval of the project. He also required the FTA to redo parts of the project’s environmental studies pertaining to seismic studies and methane near the high school and Century City, which Metro completed.

Metro and the FTA argue that the pre-construction activities were underway for Phase 2 of the Purple Line Extension to keep the project on schedule, and would not have been irreversible if an alternate tunnel alignment had been chosen after that additional review.

In the current complaint, filed by the district in January 2018, Beverly Hills Unified also alleges that FTA and Metro did not properly analyze health effects and other impacts of construction within close proximity of school grounds.

Metro representatives have repeatedly said they can build the tunnel safely, and that they will work with the district to minimize noise and other disruptions for students, faculty and staff. Metro spokesman Dave Sotero said Metro will not have further comment on the case until after the June hearing.

Construction in Beverly Hills for the Purple Line Extension began last year. Phase 2 of the extension, which includes Wilshire/Rodeo and Century City/Constellation stations, is scheduled to be in operation in 2025. The third and final phase will extend to Westwood and is scheduled to be operational in 2027.