Ccilu Footwear, with help from the Melrose Avenue store Sportie LA  and owner Isack Fadlon, took steps to reward local educators on May 14 when it donated dozens of pairs of shoes to teachers, administrators and staff at Hancock Park Elementary School. 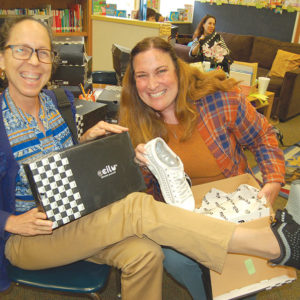 The school employees gathered in the library for what was supposed to be a staff meeting and were surprised when Fadlon presented them with dozens of boxes of new shoes from Taiwan-based Ccilu Footwear. Fadlon, who grew up in the Fairfax District and has a daughter attending first grade at Hancock Park Elementary School, said the donation was a way to give back to educators and highlight Ccilu’s (pronounced Chee-Loo) philanthropy including the “Soles4Souls” program, which is providing 100,000 free pairs of shoes to people around the world.

The teachers hurriedly searched the shoeboxes for the perfect size and style and many tried the shoes on and paraded around the room in their new “kicks.” The donation brought smiles to their faces and somewhat resembled a frenzied shopping spree.

The donation coincided with Teacher Appreciation Week. Ccilu previously donated shoes to Hancock Park Elementary teachers and staff last May, and made a similar donation in 2017 to students on the track team at Fairfax High School, Fadlon’s alma mater. This year, Ccilu also donated shoes to employees at Gardner Street Elementary School. Approximately 150 pairs of shoes total were donated to the two campuses.

“It’s the idea of celebrating the greatness in the world and celebrating what teachers do every day,” Fadlon said. “Ccilu is very philanthropic, part of its DNA is to give. This year we expanded it a little. We are trying to make it an annual event and want to take it national.”

“Last year’s #ThankATeacher event was one of the most meaningful and important donations for us,” added Ccilu Footwear Founder and CEO Wilson Hsu. “We have expanded to two schools this year, and hope to make it more of a national event in the future. We want to honor what teachers do each day by helping them do it in comfort and style.”

“It really is providing a resource for teachers that is practical and useful,” Parker added. “It’s greatly appreciated. It’s not anything we expected.”

Third grade teacher Jill Kalbrosky also thanked Fadlon and Ccilu for the donation and said there is nothing like putting on a new pair of shoes.

“It’s so thoughtful and generous,” she added. “The parent support we have at the school is just amazing. We so love coming to work and doing what we do.”

Fifth grade teacher Larry Tynan, who grew up in the Fairfax District and attended Hancock Park Elementary School in the 1970s, praised Fadlon and Ccilu for the gifts.

“This is really a neighborhood school,” Tynan said. “The support we get from parents is great. This is one of the rare schools that nearly every student who attends lives within walking distance. It’s a great place to be a teacher and a great place to go to school.”

Fadlon, who is also a member of the Friends of Hancock Park Elementary, a booster club supporting the school, said community involvement is a key part of his store’s approach to business, and that of a footwear marketing business he also operates.

“We want to do what we can to show appreciation for what teachers do day in and day out,” Fadlon said. “It’s a simple gesture and hopefully it makes a difference.”