The Los Angeles County Department of Public Health revealed on May 4 that two new cases of measles were reported between April 27 to May 1, and people in the Fairfax District and at Los Angeles International Airport may have been exposed. 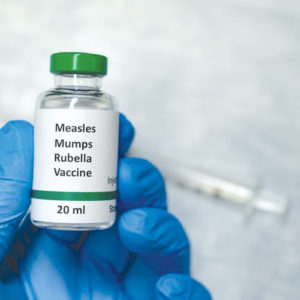 The health department said one person with measles was a Los Angeles County resident and another was a non-resident who traveled throughout Southern California. Dr. Jeffrey Gunzenhauser, chief medical officer of the Department of Public Health, would not say if the person with measles who visited several businesses near the intersection of Third Street and Fairfax Avenue was an Angeleno or a visitor.

According to the health department, people could have been exposed to measles at The Grove, the Original Farmers Market, Whole Foods on Third Street, the Farmer’s Daughter Hotel on Fairfax Avenue and its restaurant TART, or the La Brea Tar Pits on April 27, or at LAX between April 30 and May 1. For a full list of locations, dates and times of possible exposure, visit bit.ly/2vEHcMT.

Currently, there is no known risk of measles at any of these locations, Gunzenhauser said, but people can develop measles up to 21 days after being exposed.

“The main thing is we’re in very close communication with the health department, we’re following their lead and communicating with our merchants,” said Ilysha Buss, director of marketing for the Original Farmers Market.

Sally Márquez, communications coordinator for the Natural History Museums of Los Angeles County, which oversees the tar pits, said that the museum is monitoring the situation, but based on the time provided by the health department, any exposure that occurred would have been outside in the park.

“We are taking responsible precautions and have provided our staff and volunteers with background information about general exposure and encouraged them to check with their health care professionals if they have questions about their immunization history,” Márquez said.

People with measles can be contagious for about a day before developing symptoms, Gunzenhauser said, and sometimes, early symptoms aren’t identified as measles.

“It is not uncommon for [people with measles] to have traveled to various locations and exposed at least one or two dozen persons, perhaps hundreds,” Gunzenhauser said.

Anyone who was at those sites and isn’t sure they’re vaccinated should contact their doctor as soon as possible to let them know they might have been exposed to measles, Gunzenhauser said. Before a visit to the doctor’s office, anyone who is concerned they may have measles should call ahead so the medical staff can prepare and make sure no one else is exposed, the health department said, though, most people will not be affected by measles.

Vaccination is important because babies under one year old, pregnant women, and people with some health conditions that may compromise their immune systems might not be able to be vaccinated. Those people depend on “herd immunity,” where enough people are vaccinated that “the entire community is less likely to get the disease,” according to the U.S. Department of Health and Human Services.

As of May 8, eight Los Angeles County residents have been diagnosed with measles so far this year, as have six people who traveled through the county, the health department said. Of the eight measles cases among residents, three are not linked to any of the others, and two of these cases are linked to international travel. The majority of the cases involve people who were unvaccinated.

Measles is among the most contagious viruses in the world, the health department said. About 90% of people who have never been immunized against measles become ill 7-21 days after exposure. Infected people can infect those around them before they have symptoms and know they are infected. Common symptoms of measles include fever, cough, runny nose, conjunctivitis (red eyes) and a rash which usually appears 10 to 21 days after the exposure. The measles virus can be transmitted from one person to another up to four days before the onset of rash.

The recent rise of measles and other illnesses that can be prevented with vaccines has led to criticism of anti-vaccination movements. Earlier this year, U.S. Rep. Adam Schiff (D-Burbank) sent letters to Google, Facebook and Amazon asking them to stop carrying misinformation about the dangers of vaccines.

“Every online platform, including Amazon, must act responsibly and ensure that they do not contribute to this growing public health catastrophe,” Schiff said in his letter to Amazon CEO Jeff Bezos.