Wilshire Division detectives are warning the public about a male suspect who allegedly tried to kidnap a young girl last Thursday on her way to school. 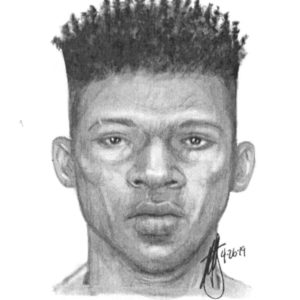 A police sketch of a suspect wanted for attempting to kidnap a young girl on April 25 was released in hopes it will lead to his arrest. (photo courtesy of the LAPD)

The girl was walking alone in the 1700 block of Vineyard Avenue at approximately 7:45 a.m. on April 25 when the suspect approached from behind. The man first stayed closely behind the victim, causing her to turn around. She then turned again and tried to continue to school when the man grabbed a backpack she was wearing and allegedly stated, “Let’s go.” The victim slipped out of her backpack and ran away, according to Det. Bernard Romero, with the Wilshire Division. The suspect was last seen running south on Vineyard Avenue.

Police did not state the victim’s age because of the nature of the crime, but Alta Loma Elementary School serves students in kindergarten through fifth grade.

The victim was not injured and immediately reported the encounter to school officials, who called police. Officers searched the area but were unable to locate the suspect.

“They beefed up patrol there along with school police,” Romero added. “We searched the area and are looking for surveillance footage. We take it very seriously.”

The suspect was described as a black man approximately 30 to 35 years old, 6 feet to 6 feet 4 inches tall with a medium build. The victim said he had curly black hair with red tips and was wearing a blue shirt and black pants.

A police criminologist later met with the victim and a drawing of the suspect was created. Anyone with information is asked to call Wilshire Division robbery detectives at (213)922-8205 and (213)922-8217. During weekends and off-hours, call the LAPD’s hotline at (877)LAPD247.