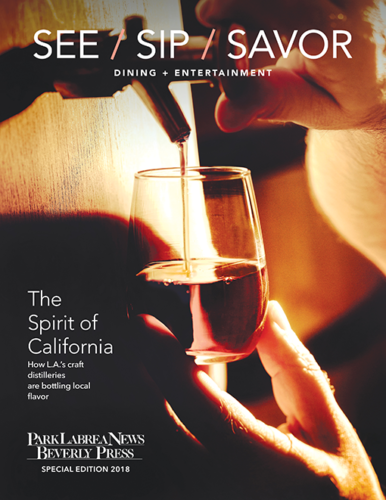 The Los Angeles Press Club has announced that the Park Labrea News and Beverly Press’ 2018 “See Sip Savor-Dining + Entertainment” magazine has been selected as a finalist in the Design category for the Southern California Journalism Awards Contest.

The winners will be honored and awarded trophies during a celebration on June 30 at the historic Biltmore Hotel in downtown Los Angeles. Park Labrea News and Beverly Press publishers Michael and Karen Villalpando will represent the newspapers. The evening begins with a red carpet ceremony at 4:30 p.m., followed by cocktails and silent auction at 5 and dinner at 6 p.m.

Awards will be presented in numerous categories. The special honorees will be CBS 2/KCAL sport anchor Jim Hill, who will receive the Joseph M. Quinn Award for Lifetime Achievement; CNN Senior International Correspondent Nima Elbagir, who will receive the Daniel Pearl Award for Courage and Integrity in Journalism; producer, author and actor Henry Winkler, who will be honored with the Bill Rosendahl Public Service Award for Contributions to Civic Life; and the creative team behind Lifetime Network’s documentary series “Surviving R. Kelly,” which will receive the President’s Award for Impact on Media.

Thanks for the laughs