What’s more likely, a woman sitting in the Oval Office or a dorky dude ending up with a gorgeous political celeb? That’s the driving conflict of the aptly named “Long Shot,” a rom-com that embraces its obvious formula with charm and a whole lotta weed jokes. But unlike the latest batch of hard-R comedies, this one delivers a solid dose of heart and laughs. 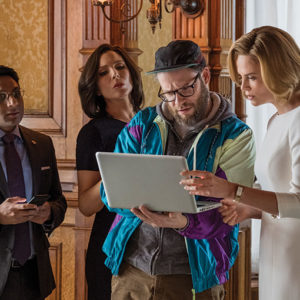 Secretary of State Charlotte Field (Charlize Theron) is a rising star on Capitol Hill, set to be a major presidential contender as long as she doesn’t ruffle any feathers before the election cycle begins. Fred Flarsky (Seth Rogen), however, is a bit of a train wreck. An idealistic writer, he refuses to compromise any of his ideals, quitting a job he needs when conservative billionaire Peter Wembley (Andy Serkis rocking some hilarious makeup) becomes the company’s latest media conglomerate owner (hey, at least “Long Shot” is developed by Lionsgate, a smaller media company than the Mouse or those Bros.).

In an attempt to appear more humorous for constituents, the Madame Secretary hires Fred as a speechwriter, hoping his off-beat sensibility can translate into memorable sound bites. As the pair hit the road together, her political finesse and his immovable convictions collide in heated debates and some other steamy moments as well. But a groomed pol and the “scrub” TLC warned us all about might prove too much for fickle news commentators and unforgiving social media. That polling data has yet to be compiled.

Director Jonathan Levine (“Snatched,” “The Night Before”) needed a win. He peaked with the incredible dramedy “50/50,” the first major team-up with longtime friend Rogen. Since then, his films never recaptured that delightful spark. “Long Shot” marks a return to form. Sure, this is a familiar story, but expert execution and plenty of hilarious gags result in a satisfying experience. 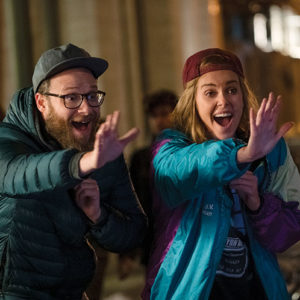 To be clear, this is actually funny, not cute and fuzzy alone but something that evokes sincere laughter. Rogen often shares the same trappings as Will Ferrell: likable dude, inconsistent film quality. For a time, that was OK while his TV productions kicked in (“Preacher,” “Future Man,” “The Boys”). But finally, Rogen provides a feature performance that appropriately captures his charm and physical antics.

As for Theron, the Oscar winner proves she belongs alongside jokesters; she need not remain in her usual dramatic fare. That’s hardly shocking considering her previous stint on the third season of “Arrested Development.”

She’s not merely an uptight politician who needs to let loose. From the start, Charlotte is a political darling, in part, because she’s attractive along with talented, a perfect talking point for news shows invoking “Fox & Friends” in all the predictable ways. Why doesn’t Charlotte merely get mad like Fred does so effortlessly in his journalistic writings? The rules are different for women in D.C., and Fred has much to learn about glass ceilings, as well as prideful behavior.

The politics of “Long Shot” are quite cynical. Fred is a caricature of how Fox News depicts liberals: a scraggly, unkempt, drug-loving journalist all too willing to drop a few four-letter words in prose attacking corporate America. He even has a friend, Lance (O’Shea Jackson Jr.), who hides his right-leaning politics and Christian faith from his judgmental bestie. And government work always results in compromise after compromise until any semblance of progress withers to lip service.

A primary message, at least for Fred’s character, is to listen to the opposition more. Such sentiment worked well on several seasons of “The West Wing,” but toxic debate is hardly this one-sided. If only things were so simple beyond the confines of the silver screen.

Comedies like this rarely go deep, and the ones that do sacrifice humor for a more complex exploration of current events. But at least “Long Shot” tries to address more, especially with the struggles Charlotte faces. Alas, the primary goal is still a fun viewing experience and an emotional connection. Theron and Rogen are an unlikely couple on screen, and frankly more films need to do this.