Worried about the effects on local neighborhoods and a concentration of power in the state Capitol, opponents of a bill that would override city zoning laws to add more density in transit- and job-rich areas hosted a town hall at Temple Beth Am on April 30. 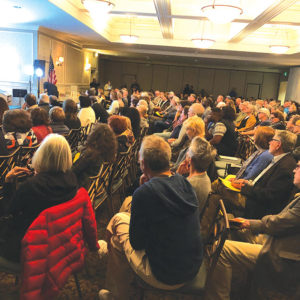 Local opponents to SB 50, including Beverly Hills Mayor John Mirisch, left on stage, gathered for a town hall at Temple Beth Am on April 30. (photo by Luke Harold)

State Sen. Scott Wiener (D-San Francisco) has said the bill, SB 50, would rectify exclusionary, single-family-only zoning that contributes to the housing crisis. But local opponents say it would decimate their communities with an influx of luxury units that would have no impact on homelessness or rent-burdened residents.

“The impact of SB 50 in Beverly Hills, for example, would be to eliminate single family housing and replace it with luxury condos, which would do absolutely nothing to address the issues of affordability,” said Beverly Hills Mayor John Mirisch, one of four panelists at Tuesday night’s town hall.

“All our decision-making is being taken away from us,” he said.

Wiener was not in attendance, but said via email that Koretz, Mirisch and the Coalition to Preserve LA, a grassroots group that has strongly opposed the bill, are “engaging in fear-mongering and spreading false information,” including an often-repeated claim by SB 50 opponents that Wiener thinks single-family housing is immoral, which he denies.

“The Coalition to Preserve LA, Mayor Mirisch, and Councilman Koretz are opposing – and misrepresenting – an actual solution to California’s housing crisis,” Wiener said. “At the same time, they offer no actual solutions to the problem. To be honest, they are pure negative energy, which isn’t helpful as we try to tackle the top problem facing our state.”

He added that SB 50 is “a good faith effort” to address the housing shortage.

Many local residents aren’t convinced, and they’re looking to hold their representatives in the Legislature accountable. The South Carthay Neighborhood Association, which hosted the event, encouraged several hundred residents in attendance to contact L.A.-area state lawmakers, many of whom have not taken a position on the bill yet, including Assemblyman Richard Bloom (D-Santa Monica). A spokeswoman for Sen. Ben Allen (D-Santa Monica) said he has concerns about the bill. A spokesman for Sen. Holly Mitchell (D-Los Angeles) said Mitchell will probably not take a position unless it reaches the Senate floor, when she would have to vote on it.

If the Legislature does send the bill to the governor’s desk, South Carthay Neighborhood Association President Brad Kane said he would encourage his neighbors to vote them out.

In a 10-minute presentation of affordable housing policy options he would prefer to SB 50, Kane mentioned a vacancy tax, such as the one implemented in Vancouver, or a tax on foreign investment in residential real estate, which has been adopted in Toronto.

Despite the opposition, SB 50 has more momentum than it did last year in its previous iteration, SB 827, when it did not make it out of its first committee hearing. In April, SB 50 passed the Senate’s Housing Committee, chaired by Wiener, with Sen. Bob Hertzberg (D-Los Angeles) casting the lone no vote. It passed the Government and Finance Committee last week, and will next be considered by the Appropriations Committee.

Organizations that have endorsed SB 50 include the California Labor Federation, California State Building and Construction Trades Council, Associated Students of the University of California and the nonprofit California YIMBY.

Konstantin Hatcher, an organizer for California YIMBY, said he believes in the bill’s ability to add affordable housing.

“We’re in a situation now where our teachers, our firefighters, our nurses can’t afford to live in our communities,” he said.

The third panelist, teacher and L.A. Tenants Union member Carmen Bordas O’Connor was also opposed to the bill. Jill Stewart, the fourth panelist and a local activist who pushed for a 2017 ballot measure that would have put a two-year moratorium on new development density in the city of Los Angeles, has helped lead grassroots protests against SB 50.

“We’re facing a real challenge,” Stewart said. “But with this many people you can actually change some things.”

Weiner is quoted in this article as saying “At the same time, they offer no actual solutions to the problem. To be honest, they are pure negative energy, which isn’t helpful as we try to tackle the top problem facing our state.”

I attended this townhall and there were at least a dozen alternative options/solutions to addressing the housing crisis proposed at this meeting. It was actually great to see my community get so involved and interested on how to solve this crisis. Why are these not mentioned in this article? I don’t get it…

We all want solutions to this crisis, but SB50 appears to simply favor developers, not residents. And if you look around in Los Angeles, the huge influx in luxury apartments/ condos and foreign investors speculating on real-estate here is definitely not creating more affordable housing. I’m pretty disappointed with our Sacramento politicians on this one. We can do better.