Children’s Hospital Los Angeles recognized the Alan Purwin Emergency Transport Program on May 1 by naming the hospital’s helipad the Purwin Family – Helinet Aviation Helipad.  The ceremony included a ribbon cutting in front of the new Sikorsky helicopter, the 323 Charlie Hotel, which will serve as the primary airship for CHLA. 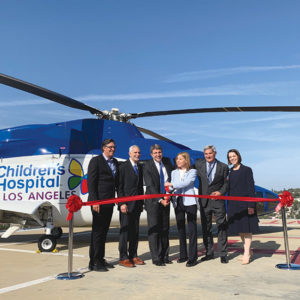 Children’s Hospital Los Angeles unveiled its new Sikorsky helicopter on May 1. Taking part in the ribbon cutting in front of the CHLA-branded aircraft were Jeffrey Worthe, chair of the hospital’s board of directors; Arnold J. Kleiner, a trustee on the hospital’s board; Paul Viviano, the hospital’s president and CEO; Kathryn Purwin, Helinet CEO and board trustee for the CHLA Foundation; Kevin Brogan, chair of the foundation’s board; and Alexandra Carter, CHLA’s senior vice president and chief development officer. (photo courtesy of Children’s Hospital Los Angeles)

Pilot, aerial film operator and philanthropist Alan Purwin founded Helinet Aviation 30 years ago. He was killed in a tragic plane crash nearly four years ago, but his legacy as a philanthropist and a humanitarian is seen every hour of every day, when one of his company’s helicopters transports CHLA patients. Alan’s wife, Kathryn Purwin, serves as Helinet Aviation’s CEO.

Helinet donates 100 percent of the emergency transport service to CHLA. Over the years, nearly 9,000 emergency missions for CHLA patients have been flown.