L.A. puts pedal to the metal on La Brea

New pedestrian- and bicycle-friendly traffic signals replaced the stop signs at the corner of Rosewood and La Brea avenues on May 28. 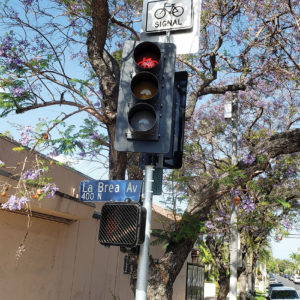 New signals at the intersection of Rosewood and La Brea avenues aim to make crossing safer for cyclists and pedestrians. (photo by Cameron Kiszla)

The signals, which resemble traditional traffic signals but have bicycle-shaped lights, stop cars and allow bicyclists and pedestrians to cross the street.

The move might add a minute or two to some commutes, but Los Angeles City Councilman Paul Koretz, 5th District, said he knew the signals were needed when he came to the intersection on a Saturday morning and saw children crossing the street by looking for breaks in traffic, then running across.

“I was just thinking, ‘Sooner or later, this is definitely an accident waiting to happen,’” Koretz said.

The city and its data backed him up. The new signals are part of the city’s Vision Zero initiative, which aims to eliminate all traffic deaths by 2025. La Brea and Rosewood avenues are included in Vision Zero’s High Injury Network, which “spotlights streets with a high concentration of severe injuries and deaths, with an emphasis on those involving people walking and bicycling,” according to the Vision Zero website.

Scott Epstein, chair of the Mid City West Community Council, said the new signals, which will help people cross the street safely and comfortably, are part of a larger plan by Mid City West to create neighborhood greenways – areas where bicyclists and pedestrians are prioritized and car traffic is reduced and slowed down, creating a “safe shared space.”

The community council plans to advocate for greenways on Rosewood from La Cienega Boulevard to La Brea Avenue, and on Formosa Avenue and Alta Vista Boulevard from Romaine Street to Third Street, Epstein said. The neighborhood greenway project has received approximately $2.3 million in funding from the Los Angeles County Metropolitan Authority for groups like the Los Angeles Department of Transportation to perform the necessary work, Epstein said.

“The idea is to create these greenways that are low stress, that anybody could ride on,” Epstein said.

As part of the process, officials were concerned that cars would use the new intersection as a cut through, which might increase traffic on the largely residential Rosewood Avenue and endanger the cyclists and pedestrians the new signs are intended to protect. To avoid that danger, drivers on Rosewood are prohibited from crossing La Brea and instead must turn right, which is intended to reduce car traffic on the streets.

“We want [the new signals] to be a safe place to cross when you’re walking or biking, but we don’t necessarily want them to be another advantage for cars to drive through,” said Mehmet Berker, co-chair of the Mid City West Community Council’s Planning and Land Use Committee.

Koretz said the new lights, which look like ordinary traffic signals at first glance, might be a bit confusing to some at first, but drivers will adjust, making the area better for bicyclists.

“I think by and large, the neighborhood will get used to it … I think this will dramatically improve bike safety,” Koretz said.