Pride Month is fast approaching in June, and the West Hollywood City Council used the May 6 meeting to fill in some of the details on how the city will support the celebrations. 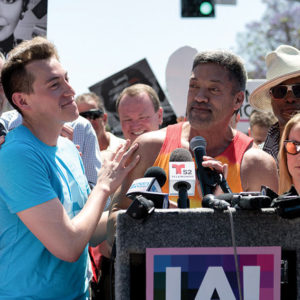 The council voted unanimously to move forward with several actions necessary for Pride Month activities, including L.A. Pride in West Hollywood, which is scheduled to begin on June 7 with a free opening ceremony concert by Paula Abdul before the ticketed festival on June 8-9. Meghan Trainor and Years & Years will headline the paid portion of the festival.

Due to construction at West Hollywood Park and a lack of space at the 2018 L.A. Pride, the event will occupy a larger area. With more space, Christopher Street West, the nonprofit that puts on the event, will create “Pride on the Boulevard,” a free, non-ticketed portion of L.A. Pride on Santa Monica Boulevard that will allow more people to participate. Portions of San Vicente, Santa Monica and Robertson boulevards will be closed. Street closures will be staggered, starting on Thursday, June 6. All streets should be reopened before the morning rush hour on Monday, June 10.

The council had previously budgeted $145,000 for the event, and in March, the council approved an additional $418,000 for security from the L.A. County Sheriff’s Department. The May 6 vote moved $500,000 from the general fund reserves to cover cleaning and maintenance costs, construction mitigation and for CSW’s costs related to the festival’s larger size. CSW alone will be receive more than $234,000.

Councilman John Duran was critical of what he said were the “significant” costs for L.A. Pride, some of which he said could be offset by the “creeping corporatization of Pride,” where the private sector is helping contribute to LGBT organizations, such as Verizon’s recently announced donation of $1 million to CSW. Duran said he would like CSW to turn over its financial reports so the city could see how much money is coming in from other sources and make an informed decision about how much in taxpayer funds would be appropriate to contribute.

“It seems like the lion’s share of the burden is on the city, and that’s not a sustainable model for the future,” Duran said.

Estevan Montemayor, president of Christopher Street West’s board of directors, said his group would use the city’s money responsibly while creating a festival that would “make West Hollywood proud.”

“We would never be negligent with the dollars from the city,” said Montemayor, who also serves as deputy chief of staff to Los Angeles Councilman David Ryu, 4th District.

As part of the motion, the council voted to look into adding a claw back provision, where if CSW makes above a certain amount of money with the festival, the city could be reimbursed for some of its expenses.

“If Pride is super-duper successful, there should be some formula of us getting some of that money back in terms of what we put out to the sheriff or the fees that we waive,” Councilwoman Lauren Meister said.

Mayor John D’Amico said he was also concerned about the city not getting its “$1.8 million-worth” in publicity from sponsoring the event. Even in the council agenda, D’Amico pointed out, West Hollywood was left out of the event’s full title.

“I think West Hollywood should be in every name, including, frankly, in our own staff reports,” D’Amico said.