Like this franchise, John Wick (Keanu Reeves) doesn’t die. Frankly, the boogeyman of the assassin underground will outlive us all, especially since Reeves is an immortal being who ages not. Come the third installment in many film series, ideas start to fizzle. Just ask Spider-Man, Alien, the Terminator and two generations of X-Men. Not this hitman. “John Wick: Chapter 3 – Parabellum” is a spectacular dance of gore, overflowing with all the charm that began this ride in 2014. 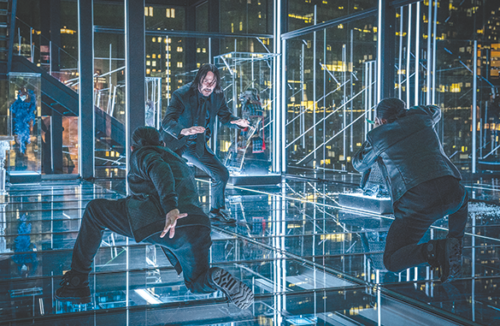 Keanu Reeves returns as the title character in “John Wick: Chapter 3 – Parabellum,” a new action film that perfectly complements the other movies in the trilogy. (photo by Niko Tavernise/courtesy of Lionsgate)

John’s on the run. He broke the rules, executing a crime lord on the neutral grounds of Hotel Continental. Now, a 10-figure contract on his life delays any chance to let all those knife and bullet wounds heal. In search of a way to survive, John traverses the world to plead his case to the Elder, an elusive figure who oversees the High Table, an elite body of assassins that secretly controls the world. Along the way, he calls in an old debt from Sofia (Halle Berry), who manages the Morocco Continental.

Back in New York, the High Table sends the Adjudicator (Asia Kate Dillon) to clean house. Too many New Yorkers helped John escape his fate, and it’s time those turncoats learned they’re a small part of a global operation. If only Winston (Ian McShane) and the Bowery King (Laurence Fishburne) knew their place. To ensure compliance, local muscle Zero (Mark Dacascos) and his crew start chipping away at the high-ups’ henchmen, reminding folks like the Director (Anjelica Huston), a member of the High Table who gave John safe passage out of the city, that allegiance belongs to the assassins’ guiding principles, not one man.

These films are what happens when a seasoned stuntman retires from the physical stuff and creates his own stories. This is hardly a groundbreaking revelation (just check out “Punisher: War Zone” by director Lexi Alexander), but director Chad Stahelski continues to bring his vision for the character to life across three acclaimed films and shows no signs of stopping. What began simply enough with a revenge story involving a dog has expanded into a complex narrative world: a code, a hierarchy, significant locales and fully-formed characters, even the ones who die quite quickly.

Comparing these films in this trilogy doesn’t make sense; they belong together. Only a few weeks have passed since the events of “John Wick,” and maybe an hour between the second and third. They complement each other quite well, building on the assassin mythology and John’s ongoing dilemma that only worsens as time goes on. 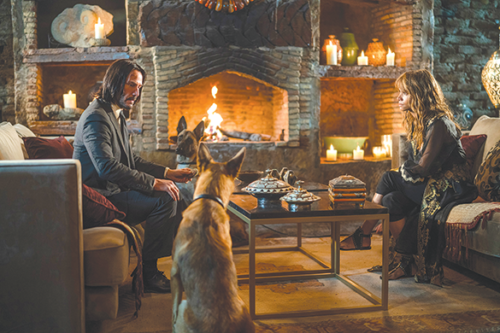 In “John Wick: Chapter 3 – Parabellum,” Wick (Keanu Reeves) seeks help from Sofia (Halle Berry), one of the most compelling characters in the movie. (photo by Mark Rogers/courtesy of Lionsgate)

One problem. The “John Wick” flicks handle women rather oddly. Sure, they feature notable sidekicks and a very dramatic death in “Chapter 2,” but this time around, Berry’s Sofia fills in a major gap. Hardly a normal supporting character, her on-screen presence feels like a backdoor intro to a new character ready to lead a spinoff. A powerful assassin, a checkered past with an estranged daughter and a couple Belgian malinoises that steal the show. With weapons and martial arts training, Reeves is a machine. Berry doesn’t miss a step. She best return.

Somehow this franchise became a modern-set “Mad Max.” The lore expands between and during incredible action sequences, and the hero need not say much. More than the previous films, “Parabellum” is like an opera. But replace two hours of nonstop singing with relentless action both shocking and insanely well executed.

John proves his skills with guns, knives, swords, an ax, even the hind legs of a couple horses (a thousand times “yes” to that last one). It all might feel exhausting without some unlikely humor laced in unexpected places from equally unlikely sources, like concierge Charon (Lance Reddick), a familiar face since the franchise’s premiere.

Perhaps the greatest feat of “John Wick: Chapter 3 – Parabellum” is how effortlessly the bonkers sequences masquerade as a regular action film premise. At no point does anything feel like a shark jump, even as John fights three guys in the knife section of an antiquities boutique, breaking cases and throwing an obscene number of knives. Somehow it all makes sense; it all must be as it is. Luke Skywalker has the Force. Harry has magic. James Bond has gadgets and STDs. John Wick resides in an eternal state of blood, exhausted but always reserving just enough energy to put two in the head and 25 in the chest.

LAMOTH hosts film series on France and the Holocaust