When West Hollywood Mayor John D’Amico was sworn in on May 20, he wanted everyone in attendance to know that he’s not leading the city alone. 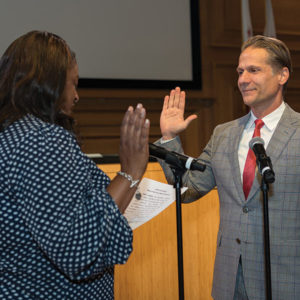 West Hollywood Mayor John D’Amico was sworn in on May 21. This is his second one-year term as mayor, a mostly ceremonial position. (photo by Jon Viscott/courtesy of the city of West Hollywood)

D’Amico said he wants all of the city’s residents to act as the city’s mayors. To illustrate his point, a rainbow of brightly-colored T-shirts adorned with the words “Mayor of West Hollywood” covered the seats in the City Council chambers.

“You know West Hollywood, you’re hoping to advance it and you’re responsible for keeping it moving in the right direction,” D’Amico said. “Isn’t that what a mayor is supposed to do?”

The reorganization meeting marked the official start of D’Amico’s second one-year term as mayor, though he has filled the role since Councilman John Duran relinquished the title in March. Duran said he was unable to continue as mayor due to health issues, but he was also facing accusations of sexual harassment from members of the Gay Men’s Chorus.

D’Amico, who was first elected to the City Council in 2011 and served his first mayoral term in 2014-15, addressed the packed council chambers and outlined his priorities for the upcoming year.

First, he said he wants to see the city find “the correct level of social services funding” to ensure help for seniors, homeless individuals and those with HIV.

D’Amico also said he wants to focus on building and safety for both seismic retrofits and sustainable building so the supply of “safe, resilient rent-controlled housing” can be maintained and maximized.

Finally, D’Amico also wants to improve the health and wellness of young people in West Hollywood, especially when it comes to preventing drug overdoses. He asked that the city assist programs that focus on the health and wellness of young black and Latino men in particular. D’Amico said the May 20 reorganization meeting was “a little muted” compared to past events so that the cost savings from a smaller celebration could be passed on to such organizations.

“Our city leads while other cities and states are flailing, inexplicably falling backwards,” D’Amico said. “In our city, our citizens jump up and start acting often before anyone else has even entered the arena. There’s a whole world out there that needs us to help show them the way. We all know that together, we can help bring more of West Hollywood to life.”

“I think we are a small city with a big heart and an even bigger vision for the role we want to play in the world. I want to be a good teammate to the people in our community who are working hard to create that vision and advance our values,” she said.

‘We’re not going back’