Approximately 700 people came together on May 7 in the Steve Tisch Cinema Center at the Saban Theatre to commemorate Yom Hazikaron, Israel’s Memorial Day for fallen soldiers and victims of terror. 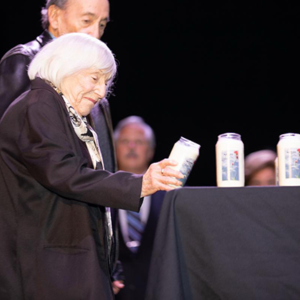 Holocaust survivor Marthe Cohn lit one of 18 memorial candles in honor of Israel’s fallen soldiers at a Yom Hazikaron ceremony at the Saban Theatre. (photo courtesy of Positive Vibes Productions)

Friends of the Israel Defense Forces, the Temple of the Arts and the Consulate General of Israel hosted the event in advance of Israel’s 71st Independence Day.

“Throughout our history, Israel has overcome challenges threatening our existence,” said Eitan Weiss, acting consul general of Israel to the Southwest U.S. “The Israeli people and the Israel Defense Forces stand in the face of all threats and remain resilient. Their courage guarantees the security and the continuity of our nation. We bow our heads because we know that Israel is here thanks to their heroism.”

Fifty-six local schools, synagogues and organizations also partnered for the gathering honoring Israel’s fallen heroes and the men and women in uniform .