A fire that erupted in a building at 6140 Hollywood Blvd. on May 19 was extinguished in approximately 20 minutes, but left questions in its aftermath. 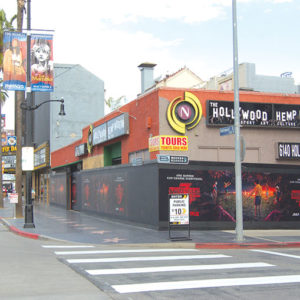 A fire damaged the interior of the Hollywood Hemp Museum. (photo by Edwin Folven)

The blaze was reported at approximately 8:40 p.m. in a building with a sign identifying it as the Hollywood Hemp Museum. Firefighters arrived to find flames coming from the roof. Initial Los Angeles Fire Department reports indicated the building may have housed a marijuana cultivation operation, but the flames destroyed the interior and authorities are uncertain what type of business was located inside, said LAFD spokeswoman Margaret Stewart. The cause remains under investigation and no estimate of loss and damage was available. Stewart said the police department is responsible for an investigation.

Det. Shannon Geaney, with the LAPD’s Hollywood Division, said the interior of the building sustained heavy damage and all evidence of what was inside was destroyed by the flames. She did not know whether there was a dispensary operating at the location or whether there was an illegal usage. Geaney added that detectives would consult with the department’s Gang and Narcotics Division, but no further criminal investigation was planned.

A temporary fence obscuring the building’s interior has been installed around the structure at the corner of Hollywood Boulevard and El Centro Avenue, just west of the Fonda Theatre. The Hollywood Hemp Museum’s website states it is “a showcase venue which houses the best events and artistic expressions that the 420 culture has to offer.” The website also states the museum is open for weekly tours, it’s looking for partners to conduct events and the building is open for event rentals. It is unclear how long the venue has been in operation. Calls and emails to the museum were not returned.