‘Hearing is Believing’ concert held at Ebell of Los Angeles 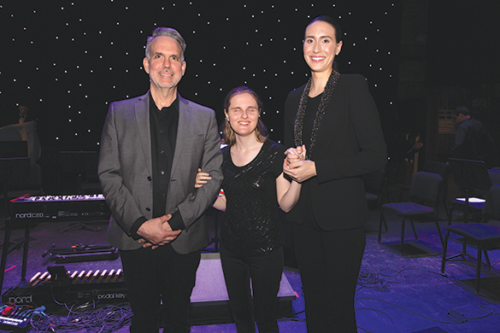 Young Musicians Foundation held its “Hearing is Believing” concert on April 12 at the Ebell of Los Angeles. The concert included the world premiere of multi-instrumentalist Rachel Flowers’ “Concerto for Organ and Other Voices.” YMF Executive Director Walter Zooi joined Flowers and YMF conductor Lauren Wasynczuk at the event.

Flowers played the organ and was accompanied by the YMF Debut Orchestra, conducted by Wasynczuk.

YMF provides tuition-free instruction to nearly 3,400 pre-kindergarten through adult students at 25 schools and sites in the Los Angeles area. The foundation supports music education in schools and neighborhoods that lack the infrastructure to support arts programming. Flowers, who has been blind since birth, is the subject of the documentary feature film “Hearing is Believing.” For information, visit ymf.org.