The Original Farmers Market will be a classic car and vintage auto lover’s dream when more than 100 vehicles go on display at the 25th annual Gilmore Heritage Auto Show on Saturday, June 1, from 11 a.m. to 5 p.m.

Visitors can walk among the classic cars and see rarities from private collectors. This year’s theme is muscle cars, and the show promises to feature some beauties. 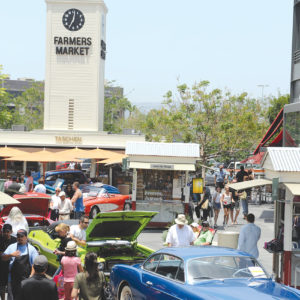 The 25th annual Gilmore Heritage Auto Show rolls into the Farmers Market on June 1. This year’s car show has a muscle car theme. (photo courtesy of the Original Farmers Market)

Highlights include a 1956 Shelby Cobra 427 SC, a 1971 Plymouth Roadrunner, and multiple Chevrolet Camaros from the late 1960s and early ‘70s. The Petersen Automotive Museum will display a 1957 Lincoln Premiere once owned by actress Jayne Mansfield. Many other classic cars will be included, such as Corvette Stingrays, and Ford Model As and Model Ts.

“Twenty-five years is a milestone. We have really taken a lot of time curating some beautiful cars,” said Ilysha Buss, marketing manager for the Original Farmers Market. “Both sides of Gilmore Lane will be filled up with muscle cars. The auto show is always a lot of fun.”

The Gilmore Heritage Auto Show pays homage to the history of the A.F. Gilmore Company, which operates the Farmers Market. A.F. Gilmore purchased land for a dairy farm near Third Street and Fairfax Avenue in 1880 and struck oil in 1900 while digging wells. The discovery led to the launch of the Gilmore Oil Company, which became well-known for its specially-formulated gasoline and filling stations that operated throughout the first half of the 20th century. The company was also known for creative marketing campaigns. Visitors can see a replica of a Gilmore Oil filling station at the market.

Over the years, the A.F. Gilmore Company created many other attractions on the property, including a stadium used for football, auto racing and other events, a baseball stadium and drive-in movie theater. The Original Farmers Market was established in 1934 and has been a popular destination for residents and tourists ever since.

“The Gilmore Heritage Auto Show is a treasured part of our deep automotive history and we are so proud to celebrate its 25th anniversary with a magnificent show of classic American muscle cars,” Panatier said. “Each year, we exhibit an in-depth collection of some of the world’s finest classic cars in a truly unique format where attendees can get up close with both the cars and their owners. Our 25th anniversary event is going to be sensational.”

Panatier said a fun part of the show comes at the end when owners fire up their cars before leaving.

“We do a drive-off at 5 o’clock,” he added. “People get in their cars and rev their engines as they are starting to head off. It’s really a fun show.”

WeHo to host CicLAvia in August