From Genovia to the Chinese Theatre

Academy Award- and Emmy-winning actress Anne Hathaway received a star on the Hollywood Walk of Fame on May 9. Hathaway, known for movies like “The Princess Diaries,” “Les Misérables,” “The Devil Wears Prada” and “Ocean’s 8,” was awarded a star in the motion picture category, located in front of the TCL Chinese Theatre at 6927 Hollywood Blvd. 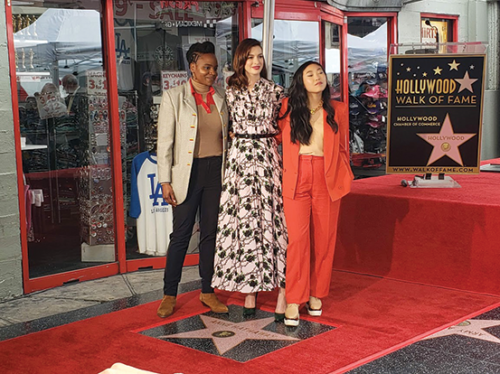 Director Dee Rees, actress Anne Hathaway, and actress and musician Awkwafina were in attendance May 9 to celebrate Hathaway’s star on the Hollywood Walk of Fame. (photo by Cameron Kiszla)

Hathaway’s newest film, “The Hustle,” opened on May 10, and costar Rebel Wilson was in attendance at the ceremony, as were director Dee Rees, “Ocean’s 8” costar Awkwafina and Los Angeles City Councilman Mitch O’Farrell, 13th District.

Rees and O’Farrell praised Hathaway for her on-screen work and efforts to help others. Rees, whose Hathaway-starring film “The Last Thing He Wanted” will be released later this year, said the actress makes an effort to boost the careers of women in the film industry.

“She boldly demonstrates the power and possibility of how one actress’ commitment can change the landscape of which films get made and who gets to make them,” Rees said.

O’Farrell praised Hathaway for her “winning personality” and her work on behalf of others.

The speakers also praised Hathaway for being personable and kind, despite being successful and famous. Awkwafina said she’s idolized Hathaway her whole life, and it was an honor to be asked to speak at the ceremony.

When it was her turn to speak, Hathaway thanked fans, many of whom crowded the surrounding sidewalks to catch a glimpse of the star.