More than 150 cities across six continents competed in the fourth annual City Nature Challenge, a community science competition to log the most observations, the most species and to engage the most people to create a valuable snapshot in time of urban biodiversity. 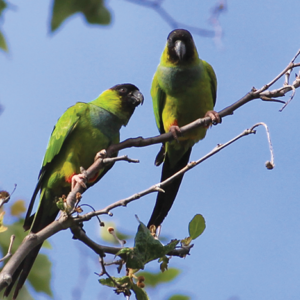 The nanday parakeet is one of more than 32,000 species that were spotted in the fourth annual City Nature Challenge. (photo courtesy of iNaturalist)

Cape Town, South Africa, tallied the most observations and the most species, and the San Francisco Bay Area tallied the most participants. Los Angeles County came in second place with 1,555 Angelenos taking part.

People of all ages and science backgrounds submitted pictures of wild plants and animals using the free mobile app iNaturalist and other recording platforms. From sightings of critically endangered species to documenting rarely seen deep-sea fish, the competition underscored the power of community science to track real-time changes in the planet’s biodiversity.

The challenge began in 2016 as a competition between the Los Angeles and San Francisco metro areas, then the Natural History Museum of Los Angeles County and the California Academy of Sciences expanded the competition to over 150 cities across 29 countries. This year’s challenge tallied over 950,000 observations, including over 1,100 rare, endangered or threatened species; engaged over 35,000 observers; and recorded close to 32,000 species worldwide. All figures more than doubled those of last year, and iNaturalist, which is powered by the California Academy of Sciences and National Geographic, witnessed the largest influx of observations in its history during the four-day challenge.

“It is really impressive what we have done with our L.A. partners this year,” says Lila Higgins, co-founder of the City Nature Challenge and senior community science manager at NHM. “Our efforts resulted in 700 new City Nature Challenge participants in the L.A. area, and public awareness around the challenge may lead to thousands of Angelenos now considering themselves community scientists.”

The Natural History Museum of Los Angeles County is located at 900 W. Exposition Blvd. For information, visit nhm.org or citynaturechallenge.org.

Bug out at the Natural History Museum

Street dance comes to the stage at CAP UCLA