On May 19, hundreds of moms, dads and kids came to the Harvey Morse Auditorium at Cedars-Sinai Medical Center to celebrate the 40th annual neonatal intensive care unit reunion. Children, teens and even grown-ups who were once tiny preemies in the NICU had an opportunity to reunite with their caregivers and show how much they’ve grown. 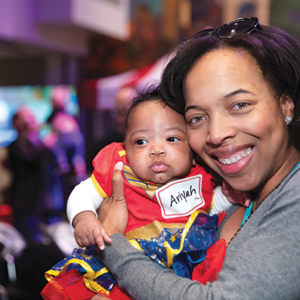 Former patients of the neonatal intensive care unit at Cedars-Sinai and their families came to the Harvey Morse Auditorium on May 19 for the 40th annual reunion. (photo courtesy of Cedars-Sinai Medical Center)

The giant party featured superhero characters including Superman, Batgirl and Paw Patrol characters, and many of the children were dressed in superhero costumes.

Adding to the fun, Rampage, the mascot of the Los Angeles Rams, posed for photos with families. The event also featured face painting, mask decorating, a game booth and music.

Los Angeles mom Grace Fontana brought her daughter Frankie, who was born five weeks premature in November, to the reunion.

“It’s thanks to the nurses that Frankie had such a good start,” Fontana said. “I want to see the nurses at the reunion, thank them again and show off Frankie so they can see what a good job they did.”

The staff of the Cedars-Sinai NICU, part of the Maxine Dunitz Children’s Health Center, welcomed families and the hundreds of babies they once cared for.

Dr. Charles Simmons, chair of the Department of Pediatrics and director of the Division of Neonatology, said the reunion was “a day of gratitude and celebration for the families and the medical center.”