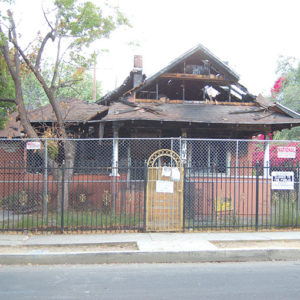 A fire significantly damaged a vacant single-family house on Hudson Avenue just north of Hollywood Boulevard at approximately 6:15 a.m. on May 3, and the cause remains under investigation. Approximately 40 firefighters extinguished the blaze in 22 minutes. Los Angeles Fire Department spokesman Nicholas Prange said firefighters arrived to find flames engulfing the rear of the structure. Because of the intensity of the flames and the house being boarded up and believed to be vacant, firefighters assumed a “defensive” mode and fought the blaze from the exterior until it was safe to go inside. No injuries were reported. The cost of the loss and damage was not available.