On Saturday, May 11, Edward Cella Art & Architecture will debut two new shows, one from Los Angeles- and Joshua Tree-based artist Aili Schmelt and another from Sara Carter of Austin, Texas, both of whom will be marking their first solo exhibitions at Edward Cella. 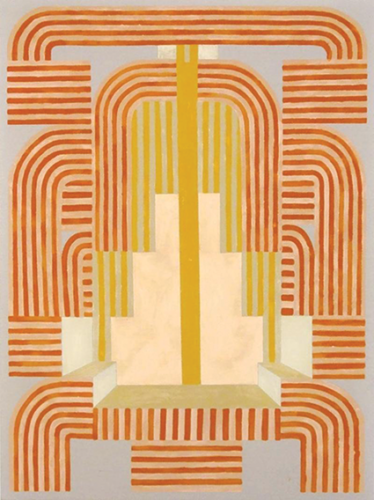 Schmelt’s show, “A Future Perfect,” reflects on modernism and architecture while challenging the notion of a perfect future. This exhibition follows her recent inclusion in the Joshua Treenial art festival, an installation at the Utah Museum of Contemporary Art, a summer residency at Scuola Internazionale de Grafica Venezia in Venice, Italy, and the upcoming Pacific Coast edition of New American Paintings.

Her ongoing project “Object/Window/Both/Neither” was developed as she was renovating a homesteader cabin near Joshua Tree. While painting the walls a stark white, it appeared the landscape shifted forward through the windows, while the walls receded into background. This discovery incited her experimentation into works that are intended to be seen as both objects and windows.

Carter’s show, “A Novel’s Protagonist,” captures moments of light, color and energy found in both order and chaos. Carter, who worked in San Francisco for several years, began working on this series late last year in her Austin studio, the Arc of Mod.

Her art is a personal exploration of the 1960s, and this series symbolizes internal transformation – like the chapter-by-chapter development of a novel’s protagonist – of a life lived in its time.

This is Carter’s first solo show at Edward Cella, but she has had multiple solo exhibitions at Graystone Gallery in San Francisco and been a part of group exhibitions at venues like the Monterey Museum of Art; the Art Fair in Cologne, Germany; and Pulse Art Fair in New York City.