The Autry Museum of the American West presents “Coyote Leaves the Res: The Art of Harry Fonseca,” an exhibit running through Sunday, Jan. 5, 2020. 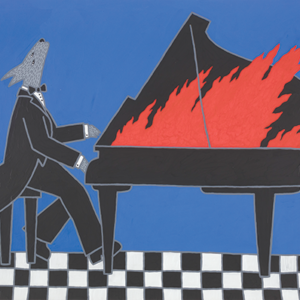 The exhibit is drawn from the museum’s acquisition of Fonseca’s estate. It includes 60 of his paintings, sketches and lithographs, and runs concurrently with the exhibit “Indian Country: The Art of David Bradley.” Together, the displays represent the Autry’s exploration of contemporary art from Native America.

Fonseca is best-known for his depiction of “Coyote,” a colorful trickster who leaves the “res” (reservation) and re-appears in non-traditional settings. The “Art of Harry Fonseca” exhibit focuses on “Coyote’s” role as an avatar for the artist and a metaphor for exploring his creative, artistic and ethnic identity within the context of the contemporary world. As a gay man and a person of mixed heritage, Fonseca used his art as a vehicle for self-discovery and a means of navigating different aspects of his life and identity during a time when ideas about Native peoples were often driven by outside forces including commercial markets, tourism and historical clichés.

Acquired by the Autry in 2016, the collection from which the exhibition draws includes over 500 original works by Fonseca as well as his personal archive of journals, papers and sketchbooks, most of which have never been exhibited, researched or published. With his trademark blend of traditional imagery, contemporary experience, and vibrant color and form, Fonseca expanded the definition of American Indian art and shattered expectations and stereotypes that had long confined it.

“Fonseca’s great contribution was in bumping up against and crossing confines that were never previously engaged. His work spoke both internally, to Native Americans, as well as externally, with those outside the ‘res,’ and nimbly traversed artistic and cultural boundaries with ideas about Indianness,” said Autry President and CEO W. Richard West, Jr.

“It was Harry who got us past this unidimensional view of what ‘Indianness’ is. Our museum’s mission to share the diverse stories of the American West guided us in our landmark acquisition of the Harry Fonseca estate, and now in presenting the story of his ‘Coyote.’”

The Autry Museum of the American West is located at 4700 Western Heritage Way. For information, visit theautry.org.

NHM presents a freeze frame of the southernmost continent