The Los Angeles Chapter of the International Society for the Advancement of Material and Process Engineering awarded three Fairfax High School seniors with Irene Epstein Memorial Scholarship awards at an event on May 16 at Fortune House restaurant in the Fairfax District. 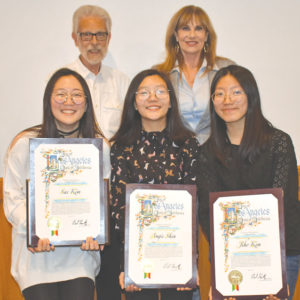 Fairfax High School students Sae Kim (left), Angie Shin and Jiho Kim received Irene Epstein Memorial Scholarships on May 16. They were joined by Dr. Howard Katzman, who works for the Aerospace Corporation and serves as education chairman of the Los Angeles Chapter of SAMPE, and Joan Pelico, chief of staff for Councilman Paul Koretz, 5th District. (photo by Patricia Katzman)

Sae Kim is in the top 1% of her class with a GPA of 4.352.  She plans to major in math and biochemistry at the University of California, Berkeley, and her goal is to become an obstetrician or gynecologist.

Jiho Kim ranks in the top 1% of her class and will graduate with a GPA of 4.405. She plans to attend UCLA to study bioengineering. While attending high school, she also worked in the Clinical Trials Office at Cedars-Sinai Medical Center and at the California Institute of Regenerative Medicine studying stem cells.

Shin is also in the top 1% of her class with a GPA of 4.327. She plans to attend Harvard University and major in physics.