A 27-year-old man who authorities described as a transient was charged on April 24 for allegedly assaulting an off-duty police officer who was working as a security guard at a Walgreens store in Hollywood. 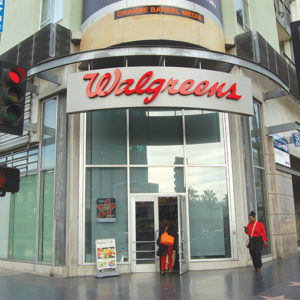 A man who allegedly assaulted an off-duty police officer working as a security guard at a Walgreens store at Sunset Boulevard and Vine Street faces felony charges. (photo by Edwin Folven)

The defendant, Daniel Keith Kennedy, pleaded not guilty to one felony count each of battery with serious bodily injury and assault by means of force likely to produce great bodily injury.

On April 22, Kennedy allegedly entered the Walgreens at Sunset Boulevard and Vine Street where the unidentified victim was working as a security guard. The victim recognized the defendant as a suspected shoplifter and asked him to leave, prosecutors said.

After he was escorted outside, Kennedy is accused of pushing the victim to the ground and stomping on his head. The severity of the officer’s injuries was not disclosed, but he was hospitalized and is expected to fully recover. Kennedy was arrested near the store shortly after the alleged crime occurred.

The defendant faces a maximum sentence of seven years in state prison. He is being held in the sheriff’s department’s North County Correctional Facility on $60,000 bail. Kennedy is scheduled to return to court on May 7 for a preliminary hearing.