After wrapping a movie more than 10 years ago, Heidi Johanningmeier said she’ll “never forget the tears coming down” when a producer called to tell her a body double would be superimposed to make her appear nude on screen. 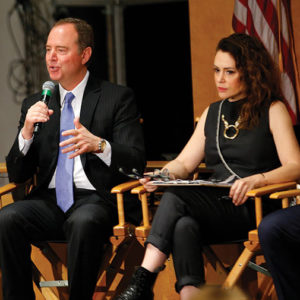 U.S. Rep. Adam Schiff and actor Alyssa Milano participated in a panel discussion on deepfake technology, which has been used to alter real video footage to show people saying and doing things that never happened. (photo courtesy of SAG-AFTRA)

“I grew up in an era when you were told, ‘if you hear it with your own ears, if you see it with your own eyes,’ [but] we’re not going to be able to trust that anymore,” Johanningmeier said. “And it won’t just be me. It will be all actors, and it will be each and every one of you.”

Deepfake technology, which can be used to manipulate pictures, video and other forms of media with artificial intelligence to show almost anything, continues to raise ethical concerns for actors like Johanningmeier, who had turned down work to avoid doing nudity. It’s also creating national security concerns for U.S. Rep. Adam Schiff, who said he worries the technology could be used to exacerbate the fake news epidemic. The two of them joined a panel discussion about the risks of deepfake at SAG-AFTRA Plaza on May 6.

Manipulating authentic footage was once a laborious, esoteric process used in TV and movies such as 1994’s “Forrest Gump,” when video of President John F. Kennedy was altered to make it look like he was talking to Tom Hanks’ character. But deepfake (a portmanteau of deep learning and fake) is now easier and more accessible through software, and shareable through social media.

“If we had cared 22 years ago, if we had cared the very first time any woman, sexual and otherwise, was disregarded, we wouldn’t be in this mess,” said Mary Anne Franks, a professor at the University of Miami School of Law and president of the nonprofit Cyber Civil Rights Initiative, another one of the panelists.

“I just hope that if there’s nothing else we can learn from this, it’s that we need to care about what happens to women because they are the canaries in the coal mine,” she added.

SAG-AFTRA National Executive Director David White, who was also on the panel, said the organization is advocating for stricter laws to protect entertainers.

“It is our view that the regulatory regime and policy and legislation is absolutely key for bringing about the types of disincentives, and frankly creating an understanding of the right and wrongness of this through the law,” he said. “We are working here in Sacramento, we work in Albany, we work in D.C., we work in other state capitals on exactly this.”

Outside of the entertainment industry, the technology could have implications for the 2020 presidential election. Schiff (D-Burbank), chairman of the House Intelligence Committee, mentioned the leaked video in 2012 that showed Republican nominee Mitt Romney telling a group of donors that 47 percent of Americans would support the reelection of Barack Obama because they depended on government entitlement programs. The video resulted in considerable backlash for the Romney campaign. Months before the 2016 election, a leaked “Access Hollywood” video showed then-candidate Donald Trump in 2005 talking about sexually assaulting women.

Both videos were authentic, but similar content could be forged with deepfake techniques by a campaign, foreign government or anyone with a political agenda.

Another panelist, Dartmouth College professor Hany Farid, has been working on technology to identify deepfake videos. So has the Pentagon. But there is still the risk of a deepfake video going viral, impacting public discourse and opinion, before it’s debunked.

“We are getting our information in such different ways that it’s more and more difficult to talk to each other,” Schiff said. “Information is curated for us on the basis of what we like and what we share and who we are and how old we are, and what race and gender [we are]. These are big problems.”