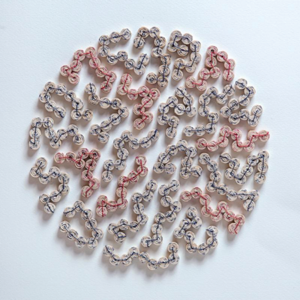 Sisson’s “Fissures III,” made of vintage paper drinking straws, thread and polymer, is among the featured works. (photo courtesy of Craft in America)

The materials of everyday life, both past and present, are the fibers that Sisson weaves together to form sculptural and textured forms, according to a news release from the center. Sisson draws inspiration from sources as diverse as Los Angeles’ landscape, microbiology, and fashion manufacturing. Glimpsing back at her work over three decades, pattern, repetition, and structure are unifying and focal themes that she explores dimensionally from her foundation in basketry and needlework. This exhibition will feature early works alongside her most recent creations-a glimpse into the oeuvre of this remarkable artist.

After studying painting and drawing at NYU, Sisson moved to Los Angeles and entered graduate school in 1983 at UCLA where she studied with Bernard Kester, one of the pioneering voices in the establishment of fiber as an art medium in the 1960s and 1970s. Ed Rossbach, Judy Chicago, Miriam Shapiro, Esther Parkhurst, and Neda al Hilali are among the artists who inspired her work and exploration of fiber early on.

Over the decades, Sisson has transformed familiar objects such as vintage zippers, clothespins, tape measure, buttons, and paper straws into abstract forms, vessels, and architectural structures.