Construction has resumed at the unfinished Target store at the corner of Sunset Boulevard and Western Avenue in Hollywood. However, the company has declined to release details about the scope of work occurring at the site and when the store will open. 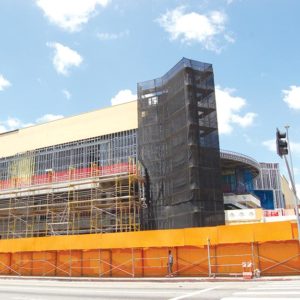 Scaffolding has gone up and work has resumed at the unfinished Target store on Sunset Boulevard in Hollywood. No details are available about an opening date. (photo by Edwin Folven)

Los Angeles Department of Building and Safety spokesman Jeff Napier said permits to resume work were issued in March, and records show the permits were for work involving exterior stairs on the three-story structure. Scaffolding has also gone up around the exterior, and workers can be seen at the site. Records show the Building and Safety Department was in the pre-inspection process for work as of May 17.

“Inspectors have verified that work has re-commenced and is ongoing,” said Napier, adding that he also did not have specific information about what type of work is occurring.

Target said it is in the process of completing the store at 5500 Sunset Blvd. but offered no further information.

“Target continues to work toward resuming construction and we look forward to opening a store that will serve the surrounding Hollywood neighborhood,” spokeswoman Liz Hancock said in a statement.

Los Angeles City Councilman Mitch O’Farrell, 13th District, who worked to bring the Target store to Hollywood and has fought to get the project back on track during years of legal wrangling with neighborhood groups opposed to the development, said the new work was a welcome sight.

“I’m pleased to finally see progress at the Target store on Sunset Boulevard and Western Avenue,” O’Farrell said. “After overcoming two lengthy lawsuits, which we won, it’s reassuring that this project is moving forward. When complete, the new neighborhood-serving amenity will provide a great deal of economic activity to the Hollywood area, employ local residents and make the neighborhood more walkable and livable.”

The Target store had been in limbo since 2014, when work was halted after a Los Angeles Superior Court judge ruled in favor of the La Mirada Avenue Neighborhood Association in a lawsuit claiming the city illegally changed zoning laws to allow it to be built. The Los Angeles City Council originally approved the project in 2012.

The neighborhood association claimed the height of the project violated the city’s zoning laws only allowing structures of 35 feet at the location. The Target store is approximately 75 feet tall.

The initial ruling in the lawsuit resulted in a lengthy delay as the city and Target filed appeals and the council approved new measures to allow work to resume. In May 2016, the City Council approved changes to the area’s Station Neighborhood Area Plan – a plan governing zoning and planning in the surrounding neighborhood – that allowed for a 74-foot building at the Target site.

The neighborhood association claimed the city changed the laws to fit the project instead of requiring the project to be changed to conform with the law and filed a new lawsuit. The matter remained in court for the next two-and-a-half years as the superior court and state court of appeals considered earlier rulings in favor of the city. The matter remained in litigation until the California Supreme Court declined to consider the case last December.

Some people who frequent the neighborhood around the unfinished Target store said they support it and hope the store will open soon. With work beginning again, anticipation is also building.

“I’ve been watching and wondering what’s going on,” said Keisha Jackson, an East Hollywood resident who regularly waits for buses across the street from the unfinished store. “It will be another place to shop in the neighborhood. I wish it would open soon.”