The Fowler Museum at UCLA presents “India’s Subterranean Stepwells: Photographs by Victoria Lautman,” an exhibition of 48 pictures of monumental manmade water storage systems called stepwells, also known as baolis, vavs and kunds in various parts of the country. These magnificent inverted constructions extend down to the water table, ranging from three to 13 stories deep. Villagers, religious pilgrims and transient traders once descended into the stepwells to find clean water and a cool, quiet reprieve from the heat above. 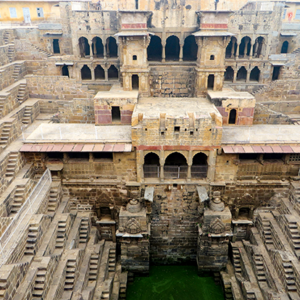 Lautman, a journalist, first encountered these subterranean architectural marvels 30 years ago, and has since documented more than 200 sites – some preserved as heritage sites, some restored as functioning community wells and active shrines, and others still remain forgotten and derelict. The exhibition will be on view at the Fowler through October 20.

“Palaces, forts, temples and tombs are on every tourist itinerary and in every guidebook to India,” Lautman said. “The country’s magnificent subterranean stepwells, however, remain largely unknown within and outside the country.”

Stepwells were first engineered and constructed in approximately A.D. 600. This exhibition focuses on documentation of 17 sites, built between the ninth and 18th centuries. As many as 3,000 stepwells once existed across Gujarat, Madhya Pradesh, Rajasthan and Uttar Pradesh, where seasonal monsoonal rains in the parched landscape of northwest India necessitated a water storage system. Often commissioned by wealthy female patrons, stepwells were sites of communal congregation and conviviality open to all, providing water for consumption, cleansing, irrigation and ritual use. Built from brick, rubble or carved sandstone blocks, stepwells were built in Hindu or Islamic architectural styles, sometimes combining both. Post-and-lintel Hindu architecture, with corbeled cupolas and complex sculptural reliefs of Hindu deities dominated prior to 16th-century Mughal rule. Thereafter, Islamic-inspired domes, octagonal shafts and colonnades with archways proliferated.

Lautman will host a gallery talk on Indian stepwells at noon on Friday, May, 17, and she’ll lead a lecture titled “Victoria Lautman on the Vanishing Stepwells of India” at 2 p.m. on Sunday, June 23.