After a pickup truck with a 7-year-old boy inside was allegedly stolen in the Miracle Mile on May 23, both the vehicle and child were recovered, police said. 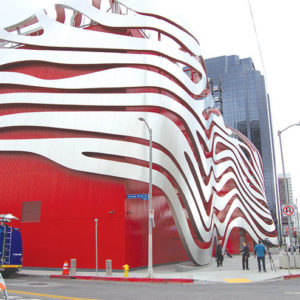 Police searched the area around Wilshire Boulevard and Orange Grove avenue after two men had a dispute and one of them sped off in a pickup with the other man’s 7-year-old son inside. The vehicle was found in Beverly Hills and the child was reunited with his family. (photo by Edwin Folven)

Sgt. Barry Montgomery said the truck, a 2001 Chevrolet Silverado, was found in Beverly Hills, and Officer Lizeth Lomeli said the child was dropped off at the LAPD’s Wilshire police station after detectives contacted the suspect’s family.

“The boy was unharmed and in good spirits,” she said.

The suspect, 26-year-old Nicky Jace of Beverly Hills, was arrested on suspicion of carjacking and kidnapping, Lomeli said.

Police believe the incident arose after a disagreement between Jace and the boy’s father near the corner of Orange Grove Avenue and Wilshire Boulevard, Lomeli said. After Jace allegedly struck the other man on the left side of his face, the boy’s father exited the Silverado. Jace then allegedly entered the driver’s seat of the pickup and drove away with the child still in the backseat, Lomeli said.

So far, the LAPD’s investigation indicates that Jace and the owner of the truck knew each other, Lomeli said, and this is not a case of a stranger stealing a child. Anyone with information is asked to call Wilshire Division at (213)922-8205.

Coaching the coaches on how to succeed