VINTAGE: Bikers go a long way for a good cause 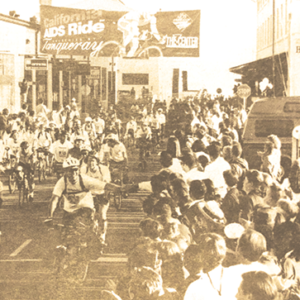 Cyclists in the California AIDS Ride embarked on an approximately 540-mile trip from San Francisco to Los Angeles in this photograph from the June 13, 1996, issue of the Park Labrea News and Beverly Press. The ride was in its third year at the time and raised $8 million for health care and other services provided by the LA LGBT Center and the San Francisco AIDS Foundation. Now known as AIDS/Lifecycle, the ride continues to support the two organizations. On June 2, more than 3,000 cyclists are expected to leave the Bay Area en route to Los Angeles, where they will arrive on June 8, in conjunction with LA Pride. The AIDS/Lifecycle Finish Line Festival will be held from 11 a.m. to 5 p.m. on June 8, at Fairfax High School.