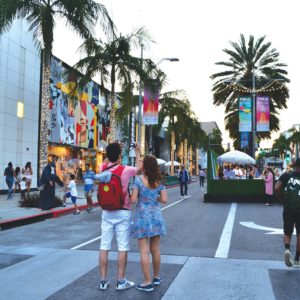 Beverly Hills City Council members said they’re excited to build on the progress the annual BOLD events have made in bringing more shoppers, diners, residents and tourists to the city for weekend entertainment. (photo by Sarah Davidson)

“I’m actually most excited about it this year because I think that we have learned from this experience,” Councilwoman Lili Bosse said during a May 7 study session. “I think we’ve worked together, and I think that what is being proposed this year really does represent our city, and represents what BOLD, in my opinion, was meant to do.”

Other highlights this summer will include art walks on Aug. 3 and Aug. 17, a “spontaneous yet staged” flash mob of performers who will put on a show and quickly disperse, and a Janet Echelman sculpture that will hover in front of the Wallis Annenberg Center for the Performing Arts on North Santa Monica Boulevard.

“I think that she is to the level that will bring people here, that is globally, internationally known,” Bosse said. “What we really tried to do this year, [worked with the Beverly Hills Conference and Visitors Bureau and Rodeo Drive Committee], was to make sure what we would support was something that they saw in terms of their vision, as well as it being elevated, luxury, experiential.”

Thierry Guetta, known by the moniker Mr. Brainwash, is a contemporary artist whose works include elements of film, celebrity culture and music. He also contributed footage for the Academy Award-nominated documentary “Exit Through the Gift Shop,” directed by street artist Banksy. Mr. Brainwash will make live art on opening night, and he’ll be available for photos.

“He’s a fun artist and he’ll set the tone for a lot of brainwashing this summer,” Beverly Hills Mayor John Mirisch said.

The total budget of Summer BOLD is approximately $1.7 million, according to city staff.

“I do think this is the kind of investment in our city that will bring about returns to the city, the kind of things we have to do,” Councilman Robert Wunderlich said.

The Summer BOLD finale, scheduled Aug. 24, will include food trucks, two beer and wine stations, a DJ and live music

“I think this will be very positive for our city,” Councilman Les Friedman said. “I think it will bring people here, I think it distinguishes us from other shopping areas.”