At open house, LAPD’s Wilshire Division to cast a spotlight on history

Meet personnel from the Los Angeles Police Department’s Wilshire Division, see vintage police vehicles and learn about the police station’s history during an open house on Sunday, May 19, from noon to 4 p.m. at 4861 Venice Blvd. 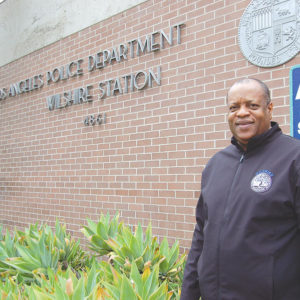 Sgt. A.J. Kirby, head of the Wilshire Division’s Community Relations Office, said the open house on May 19 will include tours, displays and information on the police station’s history. (photo by Edwin Folven)

The event is part of the LAPD’s 150th anniversary celebration in 2019, during which each of the 21 police stations in the city will open their doors to the community. The Wilshire Division was first established in 1922 on Wilshire Boulevard near Koreatown. It outgrew its initial space and moved three years later to 4526 West Pico Blvd., said Sgt. A.J. Kirby, who heads the division’s Community Relations Office.

When it was founded, the station’s jurisdiction spanned from the western edge of downtown to Beverly Hills/Culver City, and from south of the Santa Monica (10) Freeway to Hollywood. As the city grew and more police stations were built, the Wilshire Division’s jurisdiction was reduced, and the station now serves an area from Koreatown to Beverly Hills, and the Santa Monica (10) Freeway to the southern edge of Hollywood.

“A lot has changed with the division over the years. There was a lot of expansion and they had to move because they needed a bigger space,” Kirby said. “We moved to [the current] station in the early ‘70s. This is a fully-functional police station operating 24 hours. The open house will give people a good understanding of what goes on here.”

Visitors can tour the station, meet the command staff and see where different units, such as detectives and patrol, operate. They will also visit the roll call room and the intake area, where people who are arrested are brought before being taken to jail.

The open house will also include many historical exhibits with news clippings, equipment and other police ephemera from the station’s early days. Kirby said people will learn about famous crimes that occurred in the division and cited famous unsolved cases such as the Black Dahlia murder, in which the mutilated body of 22-year old Elizbeth Short was found in the Leimert Park area in 1947, and the murder of Christopher Wallace, better known as rapper Notorious B.I.G., who was killed by a gunman near Wilshire Boulevard and Fairfax Avenue in 1997. The historic displays will also focus on the Los Angeles Riots and how the Wilshire area was affected in 1992. Numerous buildings were burned or damaged during the civil unrest.

“Because it is the 150th anniversary of the LAPD, we wanted to give everyone a perspective of what it was like in the ’20, ‘30s and ‘40s and beyond,” Kirby added. “There will be information on notable things that happened and displays on the history over the years.”

The open house is also a way to build community partnerships, and people can learn about crime prevention and how to get involved by joining the station’s Community Police Advisory Board. A highlight will be the LAPD’s Force Option Simulator, which places people in real-life situations requiring split-second decision making, allowing them to experience what officers go through in dangerous situations.

Kirby said the event on May 19 will be held in addition to the division’s annual open house in October, when a large gathering with food, entertainment, children’s activities and departmental displays is planned. He added that the Wilshire Division is one of the only stations in the city to hold an annual open house, so the event this weekend will be more of a celebration of its history.

“A lot of people have a perception of the police department, but they don’t know the history and what goes on behind the scenes,” Kirby said. “This gives them an opportunity to come inside and take a look.”