A heads-up for residents before parking headaches 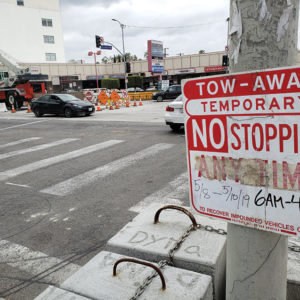 A proposal by Los Angeles City Councilman David Ryu, 4th District, would change the requirements for notifying drivers to move their cars before streets are resurfaced. (photo by Cameron Kiszla)

After an April 25 story in the Los Angeles Times detailed Kai Soremekun’s two-year battle against the city over a parking ticket and towing due to street resurfacing, Ryu introduced a motion on May 1 to have the Bureau of Street Services study changes to the process of notifying drivers that cars will need to be moved and parking won’t be allowed.

Ryu, whose office interceded on Soremkun’s behalf, said he regularly helps constituents with complaints about parking. Since Ryu was elected in 2015, his office has responded to more than 2,300 constituent parking issues, Ryu’s spokesman Mark Pampanin said.

But fixing some people’s concerns doesn’t solve the root problem, Ryu said, so he’s proposing that no-parking notices be posted for 48 hours before vehicles need to be moved – not the 24 hours currently required. He also wants to explore the possibility of making alterations to the plastic-and-wire signs, which he said can be easily vandalized or turned around, and wants the bureau to see if technology could be used to notify people who may be affected by street repairs.

“If you sign up for alerts through GPS, they could give you a notification. We have the technology to do so … Just like our NotifyLA system for emergency response based on your location, you could get text and email alerts,” Ryu said.

Ryu has been working with Adel Hagekhalil, director of the Bureau of Street Services, on potential solutions. Hagekhalil said he thinks the 48-hour rule can work for the bureau and supports ideas that will lead to more cars being moved before work begins. Cars that aren’t moved often require workers to return the next day, causing inefficiencies for the bureau.

“If we delay our work construction, it means another street is not being paved somewhere else,” Hagekhalil said.

Hagekhalil said he likes Ryu’s proposal to use technology, and he’s open to posting notices on the bureau’s website, social media and Nextdoor, which can be used to target specific areas and neighborhoods. However, those communication methods alone might not be enough for those who can’t or don’t use the internet regularly, such as senior citizens, Hagekhalil said.

“My goal is to use every channel of education available, but we can’t forget about people who don’t have access,” he added.

Ryu said he’s not sure when his motion will be voted on, but his proposal has broad support at City Hall.

“This is a no-brainer. This is common sense and all of my colleagues are in support,” he said.

Instead, Ryu said his biggest battle will be against institutionalization, the tendency for organizations like large cities to do things the way they’ve always been done.

“Sometimes change is difficult, and even when people agree, it takes time. What we’re trying to do and what I’m trying to do as a reform-minded councilmember is make that time shorter and get it instituted quicker and sooner,” Ryu said.