High-flying season planned for the Wallis

Lovers of all types of performing arts will find something they can enjoy in the Wallis Annenberg Center for the Performing Arts’ 2019-20 season, which begins Sept. 17. 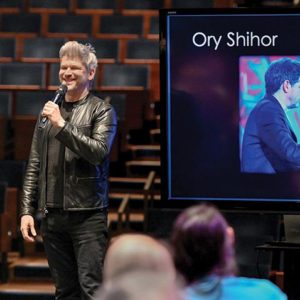 Paul Crewes, artistic director of the Wallis, and pianist Ory Shihor discuss Shihor’s April 4 show “Beethoven’s Workshop: the Most Beloved Sonatas,” which is part of the Wallis’ 2019-20 season. (photo by Rob Latour)

For the first time, the Wallis is expanding into contemporary circus with the Australian group Circa, which will bring its show “Humans” to Beverly Hills on Nov. 1-2.

“It’s a show that’s made for the stage … with trapeze, and there will obviously be a feeling of dance and theater as well. It’s a new form of circus not in a big tent,” said Paul Crewes, the Wallis’ artistic director.

The season is also full of theater, dance and musical performances, both in the 500-seat Bram Goldsmith Theater and the 150-seat Lovelace Studio Theater. Rachel Fine, the Wallis’ executive director and CEO, said she’s excited about the versatility of the Wallis in light of the wide variety of performances in both venues.

“I think what Paul and his team do is take full advantage of the assets of this building and leverage them into truly … audacious programming,” Fine said.

For dance, the L.A.-based contemporary dance group BODYTRAFFIC will be the 2019-20 company in residence. They’ll perform Sept. 26-28 and will also be part of “The Minghella Project,” the Wallis’ first commissioned dance production, from April 18-25, 2020.

Other dance performances include Contra-Tiempo’s “joyUS justUS” on Jan. 17-18 and the Lula Washington Dance Theatre Jan. 30 to Feb. 1.

Several of the Wallis’ musical performances include tributes to Ludwig van Beethoven to celebrate his 250th birthday. On Jan. 9, Simone Dinnerstein and Matt Haimovitz will perform works by Beethoven alongside the music of Philip Glass, pianist Ory Shihor will play some of Beethoven’s sonatas on April 4, and the Emerson String Quartet will honor the German composer on May 8, 2020.

Also coming this season, L.A.-based Delirium Musicum will perform a show on April 2 using the instruments from Violins of Hope, which combines art and history by telling the tales of musical instruments played by Jewish musicians during the Holocaust.

The theater season includes the West Coast premiere of “Sisters in Law,” a play about the relationship between the first two female U.S. Supreme Court justices, Sandra Day O’Connor and Ruth Bader Ginsburg, which will run from Sept. 17 to Oct. 6.

From Dec. 13-22, 12-time Grammy nominee Ledisi will perform her show “Nina & Me,” a tribute to Nina Simone that sold out the Apollo Theater in Harlem. Ledisi’s show contains reworked songs and stories about the impact Simone had on her career.

Other shows will enthrall the family, including Charles Dickens’ “A Christmas Carol,” which plays Dec. 4-8; the Australia-based Slingsby Theatre Company’s “Emil and the Detectives,” which runs March 27-29; and the Europe-based New International Encounter Theatre’s “Snow White” in May 2020.

“I’m biased, but I don’t know of a multifaceted space that honors all genres the way that this one does. It’s really hard to get a good theater space that can also do good acoustics that can also do great dance. And I think this is the best dance space in L.A.,” Fine said.

Three new shows coming to LACMA in May