A 63-year-old streetlight near Wilshire Boulevard and Spaulding Avenue was toppled by windstorms last week, and it will cost Los Angeles approximately $20,000 to replace it. 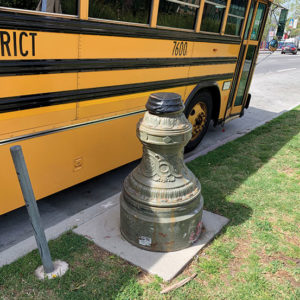 The windstorms on April 9-10 knocked down a 63-year-old streetlight near Wilshire Boulevard and Spaulding Avenue. (photo by Rebecca Villalpando)

The fallen portion has now been removed, and only the base remains. The top of the base appears to have been covered in a black plastic.

According to the Los Angeles Historical Resources Survey’s history of the city’s Bureau of Street Lighting, the streetlight is a type of “two-headed specialty light” that was installed “along Wilshire Boulevard, from Fairfax Avenue to beyond Wilton Place,” in the mid-1950s.

Diana Bulnes, a spokesperson for the Los Angeles Department of Public Works, said the city maintains and replaces streetlights “on an as-needed basis,” and no other streetlights were reported damaged by the wind.

Mark Pampanin, a spokesman for Councilman David Ryu, 4th District, said a lot of damage was caused by the gusts on April 9-10, and a field deputy is looking into the damaged light poles.

Wind gusts reached between 60 and 70 mph in some parts of Los Angeles County, and tens of thousands of people temporarily lost power.

Just a few feet from the wind-damaged streetlight was a lamppost with a cracked base. Bulnes was unable to find any information about the cracked light pole by press time.