West Hollywood will survey residents about the possible Metro extension through the city as part of its ongoing outreach on the long-anticipated project.

“It’s time for us to get from our residents what they’re thinking, since this has been in front of them now for a decade,” West Hollywood Mayor John D’Amico said at the City Council’s April 15 meeting. 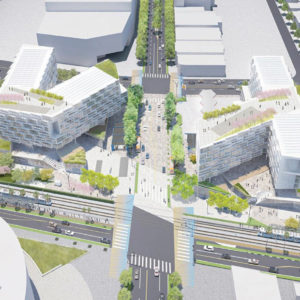 A rendering shows Crenshaw Boulevard, facing south, where a possible extension through West Hollywood would begin. (photo courtesy of Metro)

Where the route should go and whether it should be above ground or underground are two of the biggest decisions facing Metro and the city, as well as how the city will generate the funding it needs to accelerate the project, which could equal up to 25% of the cost of the portion that goes through West Hollywood. In addition to $50,000 allotted to conduct the survey, the council also extended agreements that the city has with Robert Group and Dakota Communications for up to $171,250 and $138,000 in outreach, respectively, for Crenshaw/LAX Northern Extension planning and pre-construction activities.

D’Amico, who supported the formation of a 15-resident task force, said the survey would give a more “resident-focused look” at the options for the project. He said it would be helpful if the council “had something that said ‘62% of residents want this to happen.’”

“Even if it said only five residents want this to happen, I would still probably vote for the train, but at least it would be with some kind of certainty,” he said.

Last summer, Metro presented five possible options, including four that would pass through West Hollywood en route to the Hollywood/Highland station, for extending the Crenshaw/LAX line. An 8.5-mile Crenshaw/LAX extension already under construction will extend the line from the Expo Line’s Crenshaw station to the Green Line, through L.A., Inglewood and El Segundo. The non-West Hollywood option to extend the line farther north to the Wilshire/Vermont station was the lowest-performing in terms of ridership and other projected metrics. Metro did not recommend further consideration of that option.

For the West Hollywood routes, council members said they want more feedback about whether residents want the train to go through San Vicente, La Cienega, La Brea or Fairfax. All four options would have riderships from 87,200 to 90,800, based on Metro’s projections, making it one of the most heavily travelled lines in the country. The La Brea route has the lowest estimated cost, at $3 billion, but the population and job density immediately surrounding it is lower than the other three, which would range in cost from $4.3 to 4.7 billion, according to Metro’s feasibility study. Metro recently held four public meetings to update residents and hear their feedback. Residents at the final meeting, held at the West Hollywood library on March 28, favored the San Vicente route.

“Getting some clarity from our residents as to what routes they prefer, we heard some of that at the public meeting here, but of course that’s a limited selection of people,” Councilman John Heilman said. “I like that as a way of gathering more information.”

Last September, council members indicated a preference for the train to be underground, but street-level and aerial options are also under review by Metro.

Approximately $2.3 billion would be funded from Measure M, which was approved by county voters in November 2016 and added a 0.5% sales tax for transportation. City staff is evaluating ways to generate its share of the costs, which could total $70- to $550-million (5 to 25% of the portion that goes through the city), to accelerate the project’s original 2041 start date, for potential completion in time for the 2028 Olympics. The final figure depends on the route that is chosen and other variables. David Fenn, an associate planner for the city, said it’s important to remember the impact the extension would have even if it’s not ready by the time the Olympic cauldron is lit.

“It will really change everything for mobility in the urban core with connections to four other lines and huge increases in access to jobs and health care for underserved communities,” he said via email. “That’s much more important than getting spectators and tourists from the Sunset Strip to the stadium, but if the Olympics give the project a sense of urgency or help get the attention of appropriators in Sacramento or Washington, then I’m all for it.”

Down to a fine art in Beverly Hills

Since any city estimate will undoubtedly end up costing at least twice as much, they should probably go with the lowest cost route: La Brea. I keep reading that Hollywood and Highland is the preferred terminus, so La Brea would make most sense. San Vicente would miss The Grove and Lacma anyway – and is the Beverly Center a destination worthy of all the extra costs?

Has to go La Cienega or San Vicente. Cost is no issue considering the value. La Brea has nothing on it but furniture stores and bakeries and 100% misses west hollywood and all the people. It may be the cheapest but by far the most wasteful. Fairfax is a silly idea. So much cost for the Grove and farmer’s market and a handfull of boutique shops. Service that with a bus lane down beverly blvd.
La Cienega would hit Cedars Sanai, a huge hospital and jobs hub, and it would have to turn down santa monica blvd which would service a huge number of residents and provide access to the strip, which despite what this article says is important after the olympics in a city with millions of tourists annually.

The K town line is a cop out for metro to weasel out of a good project. It should happen but not instead of west hollywood.