On March 28, representatives of the Los Angeles County Metropolitan Transportation Authority held a meeting in the community room at the West Hollywood Library, which was bursting at the seams with people who came to ask questions and make their opinions heard about an extension of the light rail Crenshaw/LAX Line. 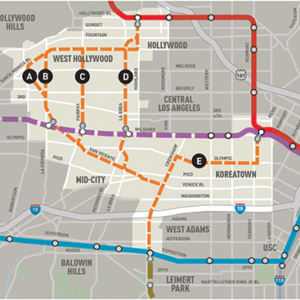 A March 28 community meeting hosted by Metro went over the five potential routes for an extension of the Crenshaw/LAX Line. (map courtesy of the West Hollywood West Residents Association)

The extension, which would connect riders to the Expo, Purple and Red subway and light rail lines, is currently scheduled to begin construction in 2041 and be done by 2047, but West Hollywood officials are working to accelerate that schedule by as much as 20 years, and they have strong public support. Even U.S. Rep. Adam Schiff (D-Burbank), whose district includes West Hollywood, is getting involved. He sent a letter to Phillip Washington, Metro’s CEO, asking for an update on the acceleration.

In news that’s sure to please Schiff and many West Hollywood residents, Roger Martin, the project manager for Metro, told the crowd that it’s “pretty much” guaranteed that within a year, the environmental impact report will begin.

Joanna Hankamer, West Hollywood’s principal planner who is overseeing the potential rail project, told the Park Labrea News and Beverly Press last month that the EIR is “where the project really becomes a real project” because that’s where the technical details will get studied and consequential decisions will be made.

Martin, who was joined by Jody Litvak, Metro’s director of community relations, and Alex Moosavi, deputy project manager, in giving a half-hour presentation, said the request for proposals for the EIR is almost done and could be released as early as May or June, putting the EIR in line for a 2020 start date.

The Metro officials also read the comment cards submitted by those in attendance and answered audience questions, including from the West Hollywood City Council members in attendance, Lindsey Horvath, John Heilman and Lauren Meister.

Concerns were raised about everything from the project’s price to the potential impact on crime. When it came to picking the preferred route, most residents seemed to support the San Vicente route, which would travel north from Exposition Boulevard to San Vicente Boulevard to Santa Monica Boulevard before heading to Highland Avenue toward the Hollywood/Highland subway station. This route is also the closest to Cedars-Sinai Medical Center, allowing hospital employees to use public transportation.

The San Vicente route, along with a similar route on La Cienega Boulevard, is anticipated to have the most daily riders, perhaps as many as 91,000. The San Vicente and La Cienega routes would have nine stations each, more than any other alternative.

Horvath, who said she was thrilled at the large turnout, said it wasn’t surprising the San Vicente Boulevard route was so popular “because it will serve the highest number of jobs and we’ll have the highest ridership of any of the alignments …  But as you heard from Metro, they’re considering all alignments.”

Litvak said Metro officials hadn’t yet had a chance to go through the feedback and identify the most popular route options, but Jose Ubaldo, a spokesman for Metro, said the most popular option changes depending on where the community meetings are held.

But if the meeting attendance figures are any indication, the desires of West Hollywood residents are likely to carry a great deal of weight. More than 200 people attended the four meetings, three of which were in Los Angeles, but approximately 110 were at the West Hollywood meeting alone.

David Fenn, an associate planner for West Hollywood, said it’s uncommon for the public to be so involved in meetings for a project, especially one that could be so far off.

“To engage more than 200 people on a project that isn’t technically scheduled until 2041 just shows how excited people are about this potential connectivity and excited they are about accelerating the project,” Fenn said.

Litvak said she’s also seen broad support for the extension, though some of the details still have to be figured out.

David Mieger, executive officer for transit corridor planning, agreed and said, “People are very, very positive about the line … but now we have to work on ‘where does it go?’”

Even in a best-case scenario, Metro said, the extension wouldn’t be done for eight to 10 years, so in the meantime, Metro is working on its NextGen Bus Study to make service better for all, Litvak said.

“Our buses are stuck in that same traffic that everybody else is,” Litvak said.