Sequels always go bigger, and Jordan Peele’s sophomore film is a transcendent conceptual predecessor to Oscar-winner “Get Out.” “Us” turns the home-invasion subgenre on its head, rather quickly expanding the narrative universe in delightful ways. 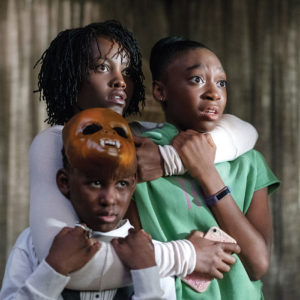 In Jordan Peele’s “Us,” Adelaide (Lupita Nyong’o), Jason (Evan Alex) and Zora (Shahadi Wright Joseph) are confronted by alternate versions of themselves called the Tethered. (photo courtesy of Universal Pictures)

The Wilson family heads to Santa Cruz for one last summer getaway. Alas, no amount of Gabe’s (Winston Duke) painful dad jokes can quell Adelaide’s (Lupita Nyong’o) anxiety over a childhood trauma at the wharf. That might come up again. Then comes the home invasion, but that’s where the expected ends.

Donning red jumpsuits, the four attackers look exactly like the Wilsons – eroded copies of the originals. Their leader Red (also played by Nyong’o) speaks in a strained voice and sports a pair of gold scissors, a symbolic weapon of choice sure to keep popping up. Who are these doppelgängers? They go by “the Tethered,” but the rest of their story unfolds throughout an intoxicating mystery worth every minute of screen time.

Nyong’o should’ve become a major star immediately following her breakout role in “12 Years a Slave.” Alas, her time would eventually come with roles in “Star Wars” and “Black Panther,” but her performance in “Us” is next level. As Adelaide, she’s a powerful matriarch, concerned for family and even showing sympathy for some of the Tethered. As Red, she completely transforms into something else, a ghost of a human hellbent on completing a singular mission.

When M. Night Shyamalan arrived, a sea of Hitchcock comparisons followed. That was premature. This might be premature too, but Peele is on his way to true Hitchcockian heights with two acclaimed horror films and a television presence as “The Twilight Zone’s” narrator and executive producer. And don’t forget he’s still keeping comedy alive beyond those “Key and Peele” sketches with “The Last OG” and other projects in the works. And of course, he’s producing a “Candyman” remake. Who needs sleep anyways? 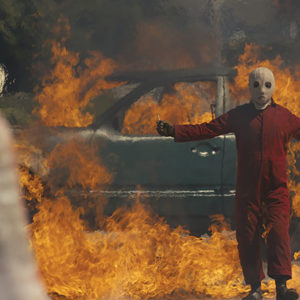 One of the Tethered confronts Adelaide (Nyong’o). (photo courtesy of Universal Pictures)

Peele remains a comedy legend and reminds us all why the horror genre has been and still is an amazing platform for thoughtful storytelling. Frankly, he accomplished that with race- and gender-themed comedy, so his current trajectory is hardly shocking.

Just to be clear, this is a horror film, a point Peele has made clear during the press junket. Unlike other films that fear such a label, preferring euphemisms like “thriller” or a tempered “high-art” horror, this instant classic acknowledges its kin.

That said, look elsewhere for jolts and pulsating scares. What transpires here is a rich, textured experience. Once the Tethered arrive, some familiar horror tropes follow, but “Us” favors a visceral surrealism. Thank Peele for his expert use of the film medium and an eerie score by Michael Abels, a sophomore composer who also debuted with “Get Out.”

The true value of a horror film resides in the third act, the grand showdown between (normally) the final girl and the film’s big bad. The climax of “Us” overflows with imagery and even a few concrete answers. And it never fizzles out or discards characters haphazardly in service of an obnoxious, irrational twist.

While “Get Out” functioned more like an episode of “The Twilight Zone” – which certainly aided writer-director Peele’s recent revival of Rod Sterling’s small screen gem now streaming on CBS All Access – “Us” disguises its true meaning behind layers of abstract imagery and exposition that raises more questions than answers. Welcome to filmmaking meant for roundtable discussions and provocative analysis.

This is audacious filmmaking. “Get Out” was a rich but simply explained premise. “Us” resists aha moments. Only meditation and a deep dive into critical theory can truly offer possible myriad meanings. Trust me though, if the spinning totem from “Inception” infuriated you, this one might break you. Or perhaps this is just what you need: something smart that doesn’t condense its broader meaning into a single line. But be warned: The whole ordeal might ruin bunnies and Hands Across America for you. That’s just fine. Amazing films like this require sacrifice.

After more than half a century, a late-night legend hangs up her apron