A Los Angeles Unified School District middle school and three elementary schools will compete from April 24-27 in the VEX Robotics World Championships, where they will challenge their high-tech peers from more than 30 countries around the world. 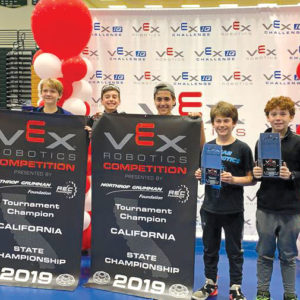 Student robotics teams from the Science Academy STEM Magnet school will compete in the upcoming VEX Robotics World championships in Kentucky. They include Dru Reed, Shai Haim and Hakop Zarikyan, of The Lab, and Nigel Peake and Zachary Rutten, of Stickman Robotics. (photo courtesy of LAUSD)

The Science Academy STEM Magnet in North Hollywood will be making its fourth trip to Louisville, Kentucky, where the international robotics competition will be held. With two teams – Stickman Robotics and The Lab – the school recently captured its sixth state championship. The Lab has the highest driver-skills ranking among the U.S. teams heading into the VEX World Championships.

Coached by parent volunteer Tripp Reed, The Lab is comprised of Shai Haim, Dru Reed and Hakop Zarikyan. Parent volunteer Howard Rutten coaches Stickman’s Nigel Peake and Zachary Rutten. The teams will compete against 186 other teams from the United States, Asia, Europe, the Mideast, and Central and South America.

Middle school teams design, build and program their robots, which compete on a 12-by-12-foot field. They rack up points during two-minute matches by maneuvering their robots to park, flip and stack plastic caps on posts, and throw balls to toggle flags.

More than 400 elementary school teams from around the world will compete in the VEX IQ Challenge, which runs from April 28-30. They include the Bots from Belvedere Elementary School in East Los Angeles; the Panthers from Pomelo Community Charter in West Hills; and Teams A and B from Vintage Elementary Math/Science/Technology Magnet in North Hills.

In VEX IQ, robotics teams work collaboratively to pick up and stack colorful hubs on a 4-by-8-foot field. They also compete individually in programming and driving skills.